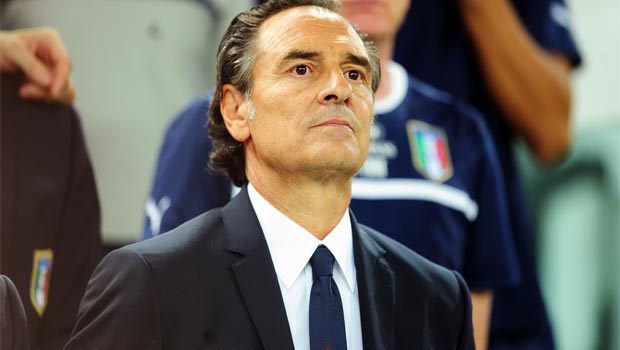 Cesare Prandelli has admitted that Italy will not be the strongest team at the World Cup in Brazil next summer but believes that they can still go all the way and lift the trophy.

The Azzurri have an impressive record in the showpiece tournament and have the chance to equal Brazil’s tally of five World Cup successes later this year, while they have also previously reached six finals.

Prandelli’s men made short work of qualifying, going unbeaten with six wins and four draws in Group B to finish six points clear of Denmark.

They have been drawn against England, Uruguay and Costa Rica in Group D and Prandelli is in bullish mood about his team’s chances, particularly having enjoyed recent success against his two main rivals in the pool.

Italy did not of course excel as champions last time out in South Africa, failing to make it out of the group stages, but Prandelli is confident of a more positive showing in Brazil and insists that there is not a side out there that cannot be beaten.

He told Gazzetta dello Sport: “The first aim is to qualify, probably as first of the group. Against England we have played a sensational game at the 2012 European Championship, but we didn’t score and we qualified at penalties.

“Against Uruguay we suffered in the second half of the final for the third place at the Confederations Cup and we won again at penalties.

“Anyone talks about Costa Rica, but I’ve started studying them. The World Cup has already started. Brazil, Argentina, Germany and Spain are the favourites.

“Let’s leave from our mind that we are the strongest; we aren’t. We are no more the best in the tournament but we can beat the best.”

Italy open their campaign against England on June 14 in Manaus, before taking on Costa Rica in Recife six days later and completing their group stage against Uruguay in Natal on June 24.