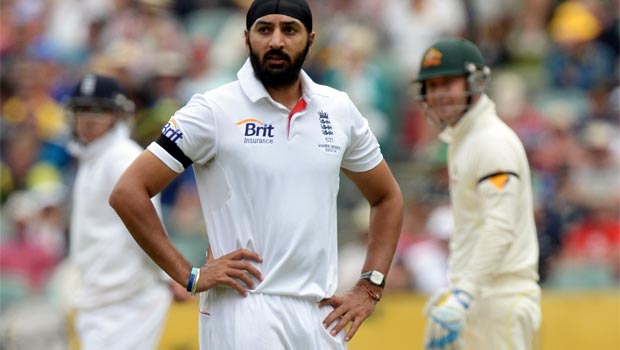 Monty Panesar is a doubt for selection after sustaining a tight calf in the build up to the fifth and final Ashes Test against Australia.

Panesar has seemingly become England’s number one spinner following the surprise retirement of Graeme Swann after the third Test, although Alastair Cook opted to throw the ball to Joe Root ahead of him in Australia’s successful run-chase last time out in Melbourne.

The final Test is set to take place in Sydney, starting on Friday, on a pitch that traditionally gives the slow bowlers some help, so England may be forced to go with the untried and untested as they look to avoid another series whitewash Down Under.

It seems unfair to throw youngsters into the mix when the side has spent the last four Tests getting battered and, according to Australia wicket-keeper Brad Haddin, is close to ‘breaking’, but the tourists may have no other choice.

Durham all-rounder Scott Borthwick and Kent’s James Tredwell were called up to the squad on the back of Swann’s decision to call it quits and, if Panesar fails to make it, could both line up in Sydney.

Tredwell has the experience of one Test – against Bangladesh in 2010 – and 24 ODIs and seven T20s to his name, but approaching his 32nd birthday he is hardly one for the future.

Borthwick has played twice for England in 50-over games and just once in T20 but, at 23, could be part of the squad for years to come – should he have the ability.

He did impress with the bat for Durham this season, scoring over 1,000 runs, while he is also a fantastic fielder, although England need him to develop with the ball to enhance his claims for the premier spinning role in the team.

Borthwick is also likely to be targeted by the Aussie batsmen as Swann had been all tour, but the youngster believes it will give him a greater chance of taking wickets – should he be selected.

“Leg-spin is hard,” Borthwick said. “You’ve got to accept you are going to bowl bad balls, and blokes are going to come after you.

“You’ve got to a bit of fight, try to get competitive and spin the ball past them. When batters do come at you, it gives you a chance to get wickets.”