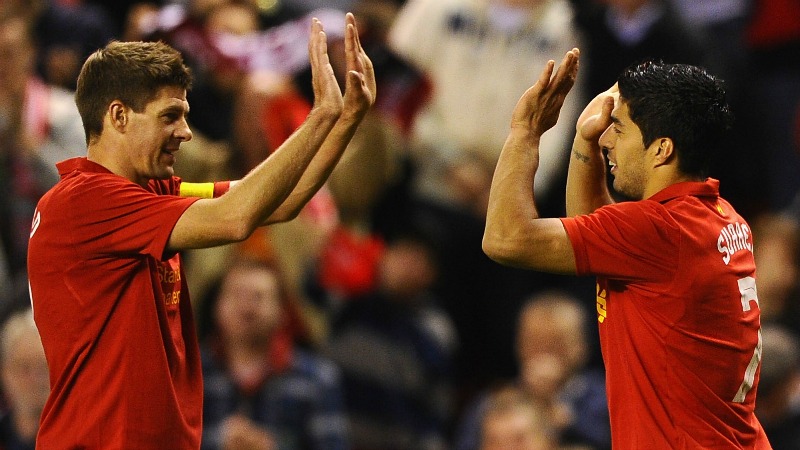 Steven Gerrard feels Liverpool striker Luis Suarez is loyal and will stay with Premier League side.

The Uruguayan is currently serving a 10-match ban for biting Chelsea’s Branislav Ivanovic, and many are suggesting that he may finally end his tumulus stay at Anfield.

However, the skipper believes otherwise.

“Luis has done the right thing by apologising and taking his medicine,” Gerrard told reporters.

“He’s really unhappy he can’t help the team, and he was really down when the ban came through. But once he is back from his ban, we will be the ones that benefit.

“Luis will want to make it up to the club and the team that he has been out for so long. He will be desperate to atone for that.

“I don’t think that what’s happened to Luis will affect him much in terms of his future. Maybe one day we will have to accept that Luis wants to move on, and that will be his decision.

“But I don’t see any signs of it at the moment. Luis has been really happy here at Liverpool and he seems settled here. I don’t see him wanting to leave right now.”

In their first match without Suarez, the Reds thrashed Newcastle United 6-0 and Gerrard is confident that they have enough quality to worry Everton in their Merseyside Derby on Sunday.

“In an ideal world we’d have Luis available because he makes the team a lot stronger. He’s had a phenomenal season, but I have a lot of confidence and belief in the squad of players we have got,” added Gerrard.

“We can cope without Luis until the end of the season. Certainly, I don’t go into the game at the weekend feeling we can’t win the game because Luis isn’t there.”

However, he did concede that they need new players, and feels that a new forward is on Brendan Rodgers’ shopping list.

“You don’t have to be a rocket scientist to know we still need another striker,” he said.

“You look at top teams in Europe and at United, City and Chelsea, and they all have three or four top strikers. That’s something we haven’t had.

“We had one until January. Then Sturridge came in and we have two. In my opinion, to compete at the top we need to have three or four strikers.”