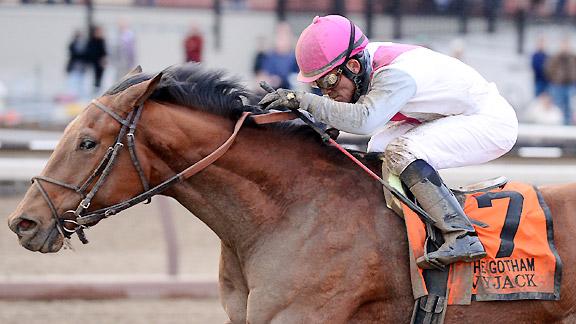 Kentucky Derby hopeful Vyjack drew the outermost stall No. 20 but his trainer is not worried a bit.

That is because the bay gelding will be handled by no less than ace jockey Garrett Gomez for the 2013 running of the US Triple Crown’s opening leg this Saturday at Churchill Downs in Louisville, Kentucky.

Trainer Rudy Rodriguez placed his trust in Gomez after Vyjack landed  the far outside spot in the starting gate.

Some trainers would devise elaborate strategies to compensate for the poor draw. Rodriguez, a former jockey and Vyjack’s morning exercise rider, knows the best-laid plans are scrambled the moment the gate springs open come race time.

Rodriguez will put the race in the hands of Gomez, the nation’s leading rider from 2006-08. Gomez is winless in nine Derby mounts.

”He’s a big boy, he’s been in the big races. It’s up to him,” Rodriguez said. ”The Derby is so hard, everything has to go perfect. When you break from the gate, it’s a different game.”

Rodriguez was atop Thursday morning for Vyjack’s final pre-Derby tune up, three furlongs in a moderate 37 seconds.

Vyjack, 15-1 on the Derby morning line, won his first four races, including the Jerome and the Gotham stakes at Aqueduct. His only loss came in the Wood Memorial, a one-length defeat to undefeated Verrazano.

”We just let him tell me when he’s ready,” Rodriguez said. ”The way he is right now is what got us here. I don’t have to change anything.”