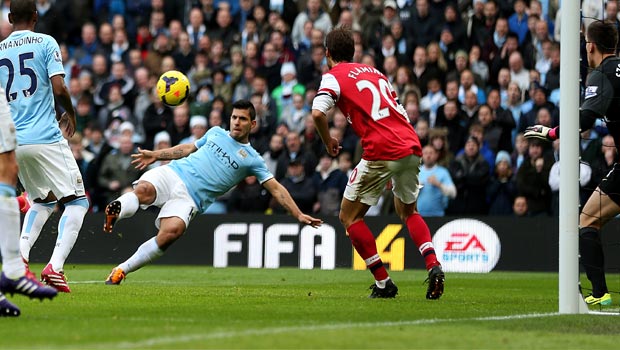 Arsenal manager Arsene Wenger says the Gunners cannot blame their schedule or any refereeing errors for the humbling 6-3 defeat they suffered at Manchester City on Saturday.

The Premier League leaders went into the clash at the Etihad Stadium with the best defensive record in the division but were undone by the pace and trickery of City’s frontline.

Fernandinho scored his first brace for his new club, while David Silva, Yaya Toure, Alvaro Negredo and Sergio Aguero all got in on the act for Manuel Pellegrini’s men.

The defeat, coupled with Chelsea’s win over Crystal Palace, has seen Arsenal’s lead at the top of the table shrink to two points.

While Wenger felt Wednesday’s Champions League trip to Napoli might have left his side feeling jaded, he refused to blame the Gunners’ hectic schedule for their defeat, admitting his side had made too many mistakes on the day.

“The concentration level we had given on Sunday and Wednesday night we had not completely recovered,” the Frenchman told BT Sport.

“It hurts to lose like that but we made too many mistakes today in the middle of the park.

“I feel as well that three wrong offside decisions today from the referee did not go very well for us.

“Overall they deserved the win. We have to go home and recover and come back for the next time. We made too many technical mistakes today.”

Arsenal will bring to an end a tough run of fixtures with a clash against rivals Chelsea on December 23. However, they will be without star defender Laurent Koscielny for the visit of the Blues after he suffered a deep cut to his knee during Saturday’s game.

Jack Wilshere is also in danger of missing the game as he faces disciplinary action by the Football Association after appearing to be pictured making a rude gesture at fans.