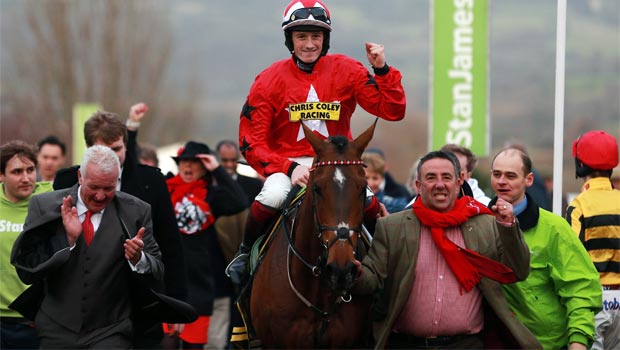 Jockey Sam Twiston-Davies and father Nigel had a day to remember at Cheltenham on Saturday as Champion Hurdle contender The New One and Double Ross scored big wins at Prestbury Park.

All eyes were on The New One ahead of the action as the five-year-old looked to further stake his claim for a run in one of the feature races at the Cheltenham Festival next March.

The New One had blown away 2012 Champion Hurdle winner Rock On Ruby in his seasonal debut and was sent off the odds-on favourite for Saturday’s International Hurdle, despite the classy Zarkandar being amongst the runners.

It looked as though Paul Nicholls’ entry would upset the odds when Zarkandar struck out for home, only for The New One to find an extra gear and cruise to the front.

Zarkandar’s clash with Jumps Road at the last hurdle put an end to his challenge, and The New One was eventually able to win the Grade Two contest by six lengths.

Twiston-Davies was delighted to see his rising stable star and son Sam combine for another win, and hopes they’ll be able to do the same again in the Christmas Hurdle on December 26.

The trainer said: “It’s different class, having the boy on board makes it extra special.

“What I loved was when the other horse got to him he quickened away – that was Champion Hurdle-type acceleration.

“He’ll have the entry for the Christmas Hurdle and as long as he is 100% he will go, as there’s so few races for him.”

The New One’s win came after Double Ross had triumphed in the Stewart Family Thank You Gold Cup following another superb ride by Sam.

The seven-year-old was able to leave pre-race favourite Colour Squadron way behind as he went clear with two to go to help make it a memorable day for the Twiston-Davies camp.