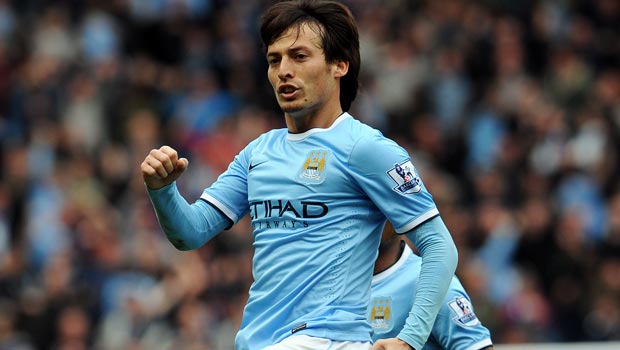 Toure has caused a storm in Manchester by issuing demands, through agent Dimitri Seluk, for the club to show him more respect.

However, Silva has reassured City fans that he has no plans to quit the Etihad after winning his second Premier League title and the Capital One Cup this season under new manager Manuel Pellegrini.

The Spaniard said: “You never get tired of winning and at the moment I’m winning with City, so I don’t have any ideas of making a change.

“We scored a lot of goals this season and it looks as though it’s building up to a good future.

“The manager has created a good atmosphere and brought a better energy to the place and the result of that is we have won two trophies so far.”

Silva, like Toure, is under contract at the Etihad Stadium until 2017 and is more than happy to remain for the duration – or extend his stay further if City want that to happen.

“That depends on the club, not necessarily on me,” he added. “At the moment I’m happy and happy to stay there.

“With football you can never predict what’s going to happen but at the moment I’m very happy and don’t see any changes.”

Silva will soon head off to Brazil with a Spanish squad who are 7.00 fourth favourites to win their fourth major tournament in a row with only hosts Brazil (3.70), Argentina (5.00) and Germany (6.00) more fancied than the holders.

And the former Valencia star also believes that City are ready to take the next step and conquer Europe after falling to Barcelona in the second round of the Champions League last season.

City look set to be included in the pot for second seeds when the draw for the group stage takes place in August.