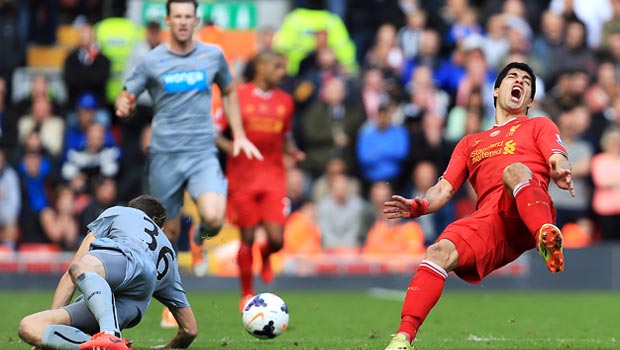 Newcastle defender Paul Dummett has received online death threats from Uruguay fans who blame him for the knee injury that could ruin Luis Suarez’s World Cup.

Liverpool striker Suarez underwent surgery on Wednesday in Montevideo but is hopeful of being fit for the group stages in Brazil.

However, Uruguay fans have targeted Dummett, 22, via Twitter for a challenge he made in Newcastle’s 2-1 Premier League defeat at Anfield earlier this month – even though it is not certain that it caused Suarez’s injury.

Dummett was sent off but his red card was later rescinded by an Independent Regulatory Commission, meaning he will not be suspended for the start of next season.

There had been no report of an injury for Suarez as a result of the challenge, but the Premier League top scorer complained of pain at the start of Uruguay’s training camp this week and he underwent keyhole surgery.

A Uruguayan Football Association (AUF) statement said he felt an intense pain in his left knee in training and that an MRI scan confirmed partial lesion of the external meniscus, leading to an arthroscopy with a partial resection of the meniscus.

Suarez, who helped Uruguay to fourth place at the last World Cup in South Africa four years ago, will need 15 to 20 days to recover but Uruguay team doctors are not ruling him out of the tournament in Brazil, which runs from June 12 to July 13.

The statement said Suarez, who scored 31 goals for Liverpool last season, sustained a knock in the club’s final match of the season.

The 27-year-old Suarez has little room for manoeuvre before Uruguay play their first match in Group D against Costa Rica in Fortaleza on June 14. Uruguay also face England and Italy in the first round.

Uruguay are 1.38 to qualify from Group D and 13.00 to finish rock bottom of the section, with Costa Rica the 1.08 favourites to end up bottom of the pile.

Suarez is expected to miss Uruguay’s warm-up matches in Montevideo against Northern Ireland on May 30 and Slovenia on June 4.