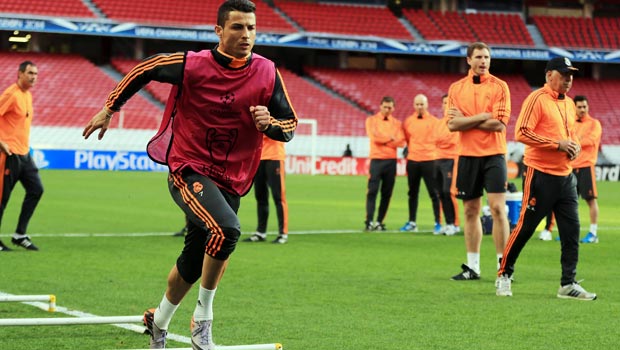 Cristiano Ronaldo has provided Real Madrid fans with a huge boost ahead of Saturday’s Champions League final against Atletico Madrid.

The Portuguese icon, who has been struggling for fitness for over a month, trained normally with the rest of the Real Madrid squad, but team-mate Pepe is unlikely to be fit for the big game in Lisbon.

Ronaldo, Real Madrid’s key man for the past five years, missed his side’s last game against Espanyol as a precaution. He had been due to start the Spanish league fixture, which Real won 2-1, but felt discomfort during the warm-up.

Real Madrid boss Carlo Ancelotti and the medical team decided to replace him in the starting line-up with Isco, taking no chances seven days before the big Champions League showdown with their cross-city rivals.

But Ronaldo is on course to start for Los Blancos at Lisbon’s Estadio da Luz after training for 25 minutes with the rest of the group and 20 minutes on his own with the physios.

France striker Karim Benzema was on his own with the doctors, with the medical staff keeping a close watch over his troublesome groin.

Pepe is set to miss the match on Saturday, with Ancelotti resigned to the fact that Raphael Varane will start at centre-back alongside Sergio Ramos.

Atletico Madrid look set to be without star striker Diego Costa after he limped off against Barcelona last week with a recurrence of a hamstring injury.

Real Madrid are the 1.99 favourites to win an historic 10th European Cup before extra time with Atletico 3.78 to pull off a shock win in 90 minutes and the draw priced at 3.30.