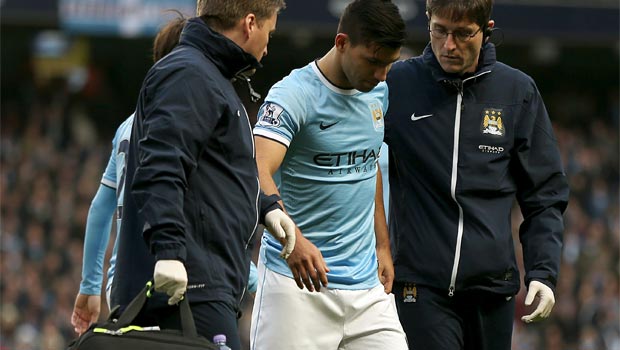 Manchester City look set to be without top scorer Sergio Aguero for the busy festive period after the striker picked up a calf injury against Arsenal.

The Argentinean scored his 13th league goal of the season in the 6-3 hammering of the Gunners on Saturday but didn’t finish the game after limping off in the 50th minute.

Manuel Pellegrini says he won’t guess how long Aguero will be out for and is now anxiously awaiting the results of further medical assessments.

Pellegrini said: “Sergio Aguero, we will see him with the doctor, maybe he has some problem with his calf but I don’t know at the moment how many weeks [he will be out for].”

Given City face a run of six games in the space of three weeks, Aguero could miss a significant number of matches.

Pellegrini is fortunate enough to have plenty of strength in depth to cover for the 25-year-old though, with Alvaro Negredo and Edin Dzeko expected to start the next Premier League game against Fulham.

The Chilean has also been boosted by the news that Stevan Jovetic has returned to training after an extended period of time on the sidelines with a calf injury.

The Montenegro international has only started three games following his summer move from Italian side Fiorentina but could return to the first team picture with Aguero unavailable.

Pellegrini feels that whoever he plays up front will get lots of goals given the talent behind them, with Yaya Toure, Samir Nasri and David Silva having all been excellent so far this season.

“Yaya, Samir and David all played very well, too. The four in the midfield are very difficult to play against. The strikers can score a lot of goals with them behind them,” Pellegrini continued.