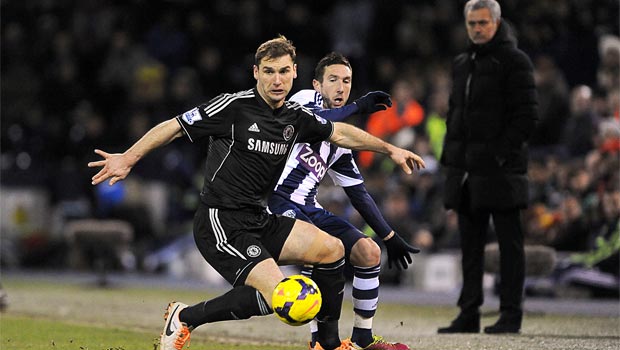 Branislav Ivanovic’s first-half goal gave Chelsea the advantage but they failed to capitalise on a number of chances and West Brom equalised through Victor Anichebe with just three minutes remaining.

The draw now gives both Arsenal and Manchester City the opportunity to return to the top of the Premier League, with Chelsea left to rue their tactics.

Mourinho’s side sat back in the second half and the former Real Madrid boss admits his side lacked the conviction needed to pick up the three points.
He said: “A ready team, a complete team, kills this game, 2-0, goodbye, but we didn’t.

“For 60 minutes, there was only one team, and that team couldn’t kill the game, especially in the first 15 minutes of the second half.

“In the second half, they opened and gave us the space we didn’t have in the first half, but we were not strong enough to kill the game.

“They had a reaction and we couldn’t cope with the reaction. The team stayed back, we were too deep. We must have the personality to get out, to not accept the pressure.”

Chelsea’s attention now turns to the FA Cup but they face a difficult task against Manchester City at the Etihad.

Mourinho’s side picked up three points against City in the league two weeks ago and they can be backed at 3.25 for another win with City 2.15 for victory.