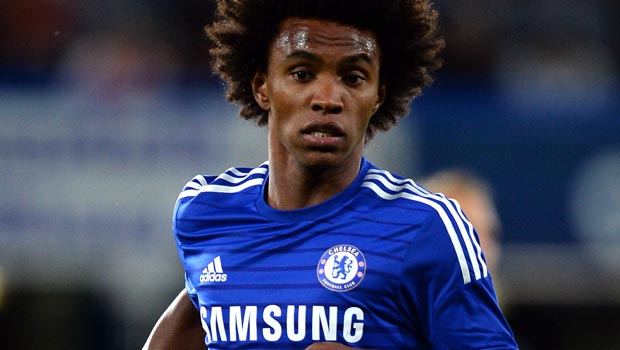 Willian feels he needs to score more goals for Chelsea if he is going to become a permanent fixture in boss Jose Mourinho’s starting plans throughout the course of this season.

The 26-year-old Brazil international midfielder had to settle for an appearance from the substitutes’ bench in the Blues’ 3-1 opening Premier League win at Burnley on Monday night as summer signing Cesc Fabregas got the nod in midfield.

The former Barcelona and Arsenal star put in a man-of-the-match display at Turf Moor as he set up two of the goals for Andre Scurrle and Branislav Ivanovic, while he is also renowned for chipping in with his fair share of goals at his previous clubs.

Therefore Willian, who enjoyed a good first season at Stamford Bridge after arriving from Ukrainian side Shahktar Donetsk last summer, knows that he must sharpen up in front of goal whenever he gets an opportunity to play this season given that he only managed to score four times last term.

“I think I have to score more goals, to play better and just be better,” said Willian.

“Last season I did good, not bad, but I want more.”

He added: “New players have come in and this season we have to win some titles.”

Chelsea are 2.40 favourites to win the Premier League this season, while they can be backed at 1.17 to defeat Leicester in their first home league game of the season on Saturday.