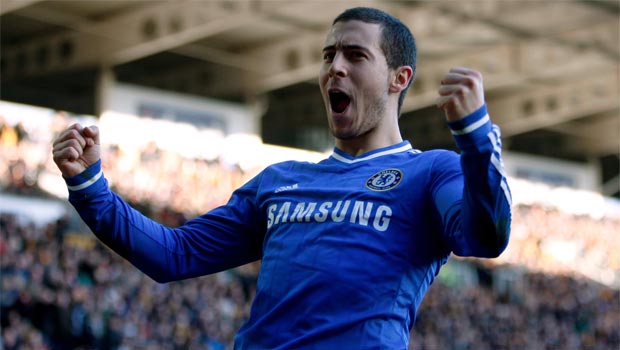 Chelsea playmaker Eden Hazard says he is ready to put the work in to become the world’s best player as he looks to elevate himself to the same level as Lionel Messi and Cristiano Ronaldo.

The Belgium international has been in scintillating form of late, scoring a hat-trick in last week’s 3-0 victory over Newcastle as the Blues climbed to the summit of the Premier League.

Not only has the 23-year-old scored 12 Premier Leagues goals this season, he has also created more chances than anyone else in the division.

Hazard’s excellent showings for Chelsea have prompted manager Jose Mourinho to describe him as “probably the best young player in the world”.

While welcoming the praise of the ‘Special One’, Hazard says he isn’t totally satisfied with his recent showings and is eager to raise his game.

The former Lille forward has set his sights high though, claiming he wants to achieve the kind of super-stardom Messi and Ronaldo have attained.

“I’m very happy because it’s very pleasing when it comes from him,” Hazard told the BBC following Mourinho’s comments.

“But I hope eventually people will drop the word ‘young’ because that will mean I have moved up.

“To get to the level of Ronaldo or Messi I have to work extremely hard because those players are on another planet.”

While becoming one of the world’s best players is Hazard’s long-term goal, the playmaker is happy to focus on Chelsea’s current season for now.

The Blues are still in the hunt for three pieces of silverware and are priced at 2.45 to win the Premier League after claiming top spot.

Hazard admits confidence is high at Stamford Bridge but insists there is still a long way to go in the fight for trophies.

“There is a great atmosphere at the club but we’re not getting carried away because big games are ahead,” he added.