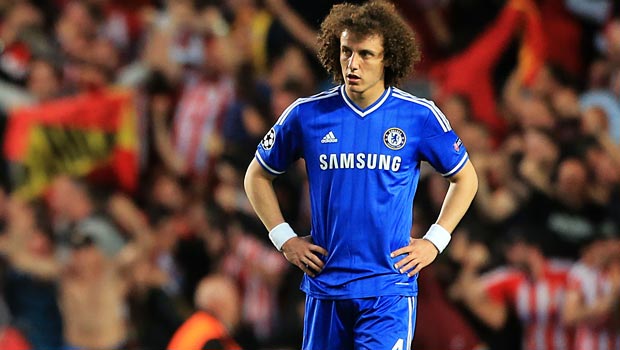 Chelsea’s Brazilian defender David Luiz admits Atletico Madrid were “the better team” after his side crashed out at the semi-final stage of the Champions League on Wednesday evening.

Atletico showed just why they are top of La Liga with a devastating display at Stamford Bridge, coming from 1-0 down, after Fernando Torres had scored his first goal in 12 matches, to win 3-1 and set up a date with city rivals Real Madrid next month.

And, despite suffering the odd bit of misfortune, Luiz, who saw a second-half effort on goal hit the post, says Chelsea can have no complaints about the harrowing defeat overall.

“They were the better team and deserved to win,” he said. “We tried our best – we hit the post and [Thibaut] Courtois made one or two very good saves.

“We controlled the game in the first 40 minutes, but we conceded a goal at the end of the first half and they created a plan again to wait and wait and play on the counter-attack.

“Then we conceded a penalty and they scored a second goal. That’s the Champions League – both big teams and big players. Atlético were strong on the [small] details and in the big games the details make the difference.”

He added: “We gave everything and were unlucky in some moments, but that’s football – you cannot win every game. I would have liked to play the final in Lisbon, but I leave with my head held high, having done my best on the pitch.

“Unfortunately it wasn’t enough. We must congratulate Atlético, who have a great team and a great philosophy to play football.

“They deserve to be in the final. There is no favourite [for that match]. A final is a final – anything can happen.”

Atletico now face off against city rivals Real Madrid in what will be a huge occasion in the Champions League final in Lisbon on May 24.