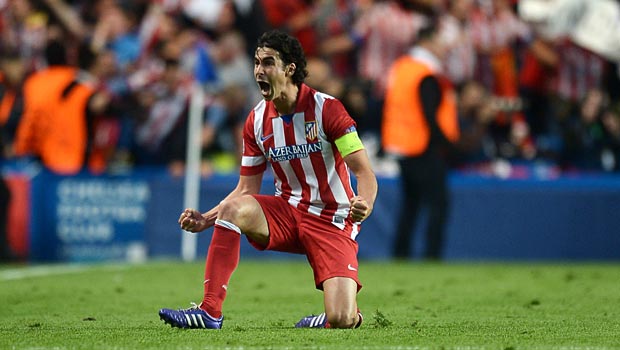 Atletico Madrid midfielder Tiago admits he is in “dreamland” as his side remained on course for a hat-trick of trophies after booking their place in the final of the Champions League at the expense of Chelsea.

The Spanish side recovered from the shock of going 1-0 down following a goal from former striker Fernando Torres to completely dominate the Blues and win 3-1 in London on Wendesday.

The win at Stamford Bridge sets up a historic Champions League final with city rivals Real Madrid in Lisbon on May 24, by which stage they could have wrapped up a domestic league and cup double.

Atletico are four points clear of Barcelona at the top of the La Liga standings with three games left to play, and have a Spanish Cup Final appearance to also look forward to this Sunday.

“We played well against a very good team and we are very happy to get to the final,” said Tiago, a former Chelsea player.

“Scoring before half-time was very important for us – it gave us confidence. In the second half we were able to play in the spaces behind the Chelsea defence and we are very strong when we play like that.

“Chelsea’s goal did not change anything. We knew that it could happen, but we also knew that with one goal we were in [control]. After the penalty we killed the game – we controlled the ball, we scored a second goal – and I think we were the best team on the pitch.

“It is unbelievable for us to play this final. On Sunday we have another final against Levante and maybe we have a possibility to win the league title as well. This season is a dream.

“Facing Real Madrid does not make it extra special – the Champions League final is special in itself. We know each other very well, but we have a lot of time to think about the final. We have to concentrate on the final we have on Sunday.”

Real Madrid are 1.52 to win the Champions League while Atletico are 2.66