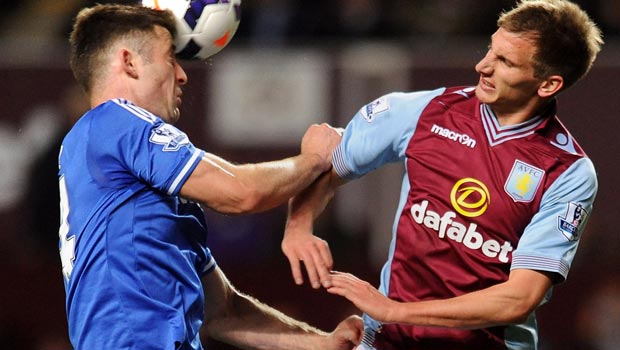 Having scored no less than 30 goals against Aston Villa in their last nine meetings, leaders Chelsea will be confident of all three points on Saturday.

Jose Mourinho has constantly played down Chelsea’s title challenge, despite the fact they sit proudly at the top of the Barclays Premier League table, three points ahead of both Liverpool and Arsenal, and with a nine-point cushion over Manchester City, albeit having played three games more.

The Blues get the chance to maintain that gap at least on Saturday evening on a ground where they have gone goal crazy in the past, banging eight in without reply two years ago, while a look further back at the record books reveals that they rattled up a 7-1 victory in 2010.

Villa Park is obviously a happy hunting ground for the London side, and they will line up in confident mood, having embarked on a 14-match unbeaten run in the league. Chelsea are bidding to do the double over their Midlands opponents, having come out on top narrowly 2-1 at Stamford Bridge in the reverse fixture.

Although they still lack a talismanic striker of the quality of Didier Drogba, the goals have been flowing, with even Andre Schurrle netting a hat-trick against Fulham the other week, while they steamrollered Tottenham 4-0, and although Villa recently ended a four-match losing run by thumping Norwich 4-1 recently, it is difficult to oppose the visitors even if Fernando Torres fails to shake off a muscle problem.

Villa have had a nice little break since the Norwich win, but that will not count for too much on Saturday, with Dafabet making Chelsea solid favourites at 1.50. It is 6.50 Villa and 4.01 the draw.