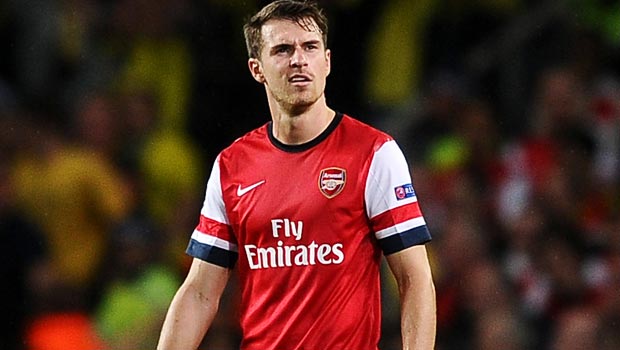 Arsenal’s injury worries continue to mount with the news that Aaron Ramsey has not recovered from a thigh strain in time to be considered for the big derby clash against Tottenham.

The Wales international has been absent since December, and it was hoped that he would be ready to make a comeback at White Hart Lane to help the Gunners in their title challenge.

However, coach Arsene Wenger is resigned to being unable to use the midfielder for a little longer.

“We have had to defer his comeback to full training a little so he is not available,” the Frenchman said.

“He is having difficulties in the final stages of his rehab. It looks to be short-term.”

Ramsey was in superb form earlier in the season along with Jack Wilshere who remains sidelined with a broken ankle, while Theo Walcott is also out of action.

As if that was not bad enough, now Germany international Mesut Ozil is resigned to being out of the side for around a month with a hamstring problem, having soldiered on until half-time during Tuesday’s Champions League defeat at Bayern Munich.

Wenger revealed he does not know when the former Real Madrid star will return, adding: “I don’t know for how long but it is a hamstring injury. There are scans going on.”

With games against Chelsea, Swansea, Manchester City and Everton all coming after the Tottenham game, Wenger could have done without this latest injury blow.

On the plus side, midfielder Kim Kallstrom is set make his debut against Spurs. The Sweden international has been out with a back problem since his loan move from Spartak Moscow.