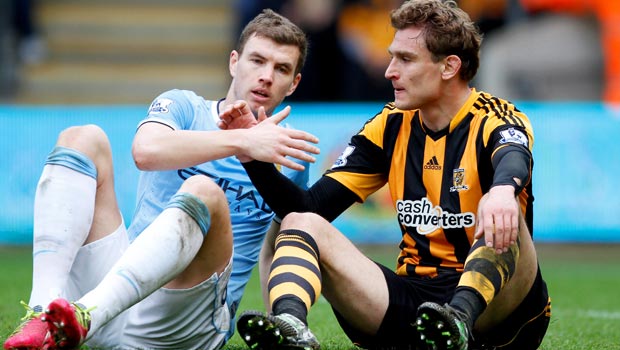 Having been knocked out of two cup competitions last week, Manchester City begin the quest to catch Chelsea at the top of the Premier League table when they travel to Hull on Saturday.

One half of Manchester was left feeling blue last weekend when it saw hopes of landing the FA Cup once again dashed by Wigan Athletic, and this just days after being knocked out of the Champions League by Barcelona.

There is always a silver lining though, and now Manuel Pellegrini can rally his troops to give their undivided attention to making the most of the three games in hand that they have over leaders Chelsea.

The quest begins at the KC Stadium at lunchtime on Saturday when they visit a Hull City side still on cloud nine after disposing of Sunderland to reach the last four of the FA Cup for the first time since 1930.

However, the hosts have lost each of their last two home league games, and are still not assured of survival in the top flight, with just nine points separating the bottom eight clubs.

The good news for Hull manager Steve Bruce is that he can once again call on the services of strikers Shane Long and Nikica Jelavic who were both cup-tied last weekend, although influential midfielder Jake Livermore is doubtful with a thigh strain.

If he fails to recover in time, his inclusion will be sadly missed as he has built up a good partnership with another ex-Tottenham man Tom Huddlestone, and for this reason City are fancied to come out on top.

They have enough talent in the squad to dominate proceedings, and even without the injured Sergio Aguero, will be confident of scoring with the likes of Edin Dzeko and Alvaro Negredo to call on, despite the fact they haven’t won away at Hull in the league since October 1909.

That is a staggering statistic, and one that City will be keen to break in a match that kicks off at 12.45pm UK time on Saturday.