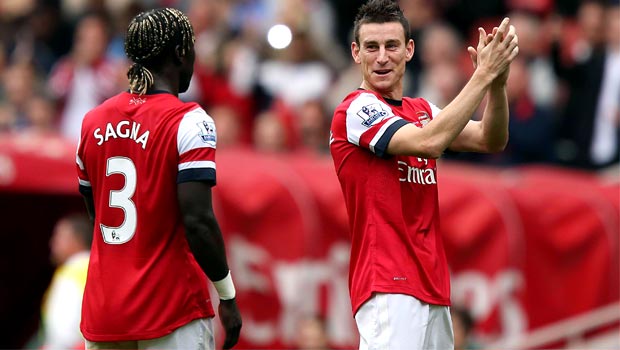 Arsenal defender Laurent Koscielny admits he is dreaming of netting the winning goal that will secure the Premier League title this season.

The France international is no stranger of scoring on the final day of the season, having netted in the past two seasons to help secure Champions League qualification for the Gunners.

The centre-back is yet to score his season, but admits he is hoping he can be the man to score the crucial winning goal that could make the difference on the final day and continue his own personal run.

Koscielny has formed a solid partnership with Per Mertesacker this season as the pair continue to try and collect as many clean sheets as possible.

Wenger’s side will travel to Carrow Road to face Norwich City on May 11, and he has already began thinking about netting the winning goal.

He told The Sun: “I took the bet that I’ll score the goal to make us champions because, for the last two seasons, I’ve got the goals that got us into the Champions League.

“Both at West Brom in 2012 and last year at Newcastle, my goals clinched our place in the top four so, hopefully, I can score an even more important one this year in our last game at Norwich.

“But I have to admit I don’t have a secret formula.”

The Gunners are 5.00 to lift the Premier League title, and their next few fixtures will have an impact on the title race.

They have a difficult test on Saturday when they take on Liverpool, and you can back them at odds of 3.43 to take the three points away from Anfield.