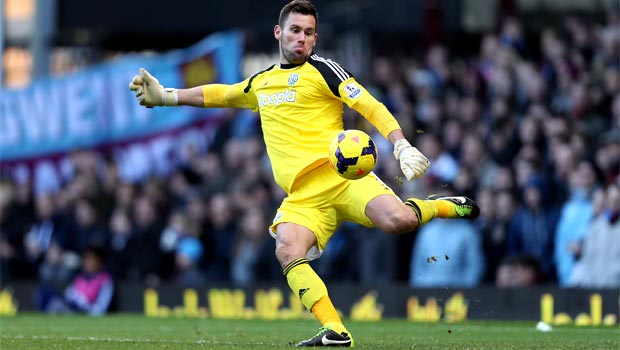 West Brom goalkeeper Ben Foster is hoping to challenge Joe Hart for the England number one jersey, but he admits that the Manchester City stopper is the obvious first choice.

Foster has his sights on a World Cup place, with Roy Hodgson set to take a 23-man squad to the World Cup finals in Brazil this summer.

With three goalkeepers expected to travel, Hart will most likely be the first choice if match fit. The City keeper has had a difficult season so far, after being dropped following a number of high-profile mistakes. His errors cost City dearly against the likes of Chelsea and Bayern Munich, but he has rediscovered his form at the right time.

Foster has recently returned following a spell on the sidelines through injury and he admits he will challenge all the way for the starting spot.

However, despite his desire to play for England he admits that Hart should be the starting keeper when England play Italy on June 14.

He told the Daily Mirror: “I don’t want to sit on the bench, it’s boring. I want to play every game I am involved in.

“But you’ve got to look at Joe Hart. It was a big thing for him to be left out of the City team.

“But he’s come back and looks as fresh as a daisy. It’s good to have that back. He is a huge asset for the England team.

“I get to see him in training with England. He’s one of the best keepers I’ve ever trained with.

“I know what he’s capable of and I think he should start in the World Cup. As long as he keeps his performances up high then he’ll be a huge benefit to us in Brazil.

“Don’t get me wrong, I want to play but I’ve got to be realistic.”

England face a difficult task to get out of Group D, with Italy, Uruguay and Costa Rica all set to cause problems.

They can be backed at 3.10 to win the group as Hodgson’s men look to cause a big upset.