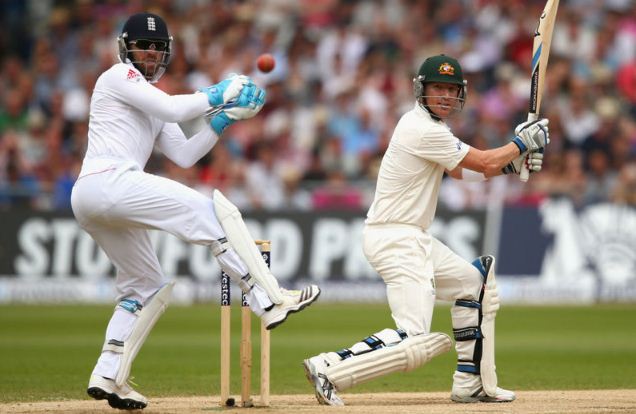 England survived a brave fight-back from Australia to secure a narrow 14-run victory in the first Ashes Test at Trent Bridge.

The Three Lions looked on course to wrap up a comfortable win when James Anderson took three wickets for six runs but some late heroics from Brad Haddin and James Pattinson set up a dramatic finish.

The duo put on a 10th-wicket stand of 65 before Anderson took the final wicket of Haddin (71), with the help of a review, as the tourists were bowled out for 296, just 15 runs short of glory.

England skipper Alastair Cook praised the Australians after they took the Test right to the wire and he also hailed Anderson who finished the match with 10 wickets.

“Australia fought incredibly hard and a lot of credit to them for the way those guys batted today, but we just hung in there incredibly well,” Cook said after the match.

“Jimmy was outstanding. He always wants one more over – I think 13 was probably quite a lot in that first hour!”

Meanwhile Australian captain Michael Clarke tried to take the positives from the defeat and says they are capable of bouncing back in the second Test that gets underway later this week.

“We’re prepared well, we had a really good five days of cricket, plenty of ups and downs, and we can hold our heads high,” Clarke said.

“I’m as confident as I was when we landed here. We get another crack in four days so we’ll look forward to that.”