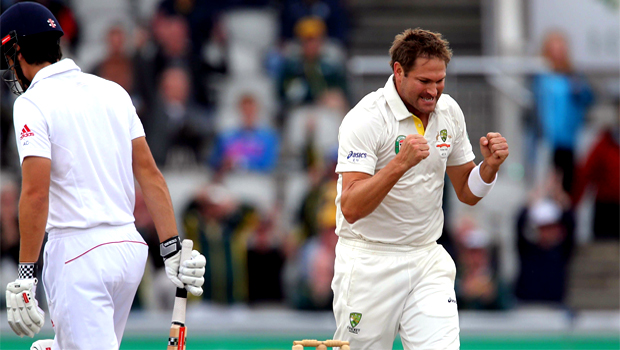 History is not exactly on Ryan Harris’s side in regards to his potential availability and selection for fourth Test against England, starting on Friday, but Australia captain Michael Clarke is confident that he will be able to call on 33-year-old’s services.

Harris was unavailable for the opening Test of the Ashes series but showed his worth to the side when he got his name on the honours board at Lord’s with a five-wicket haul in the second at Lord’s.

He also took two wickets in each innings at Old Trafford and might have had more had the weather not intervened, forcing an early finish with the Baggy Greens in the driving seat.

The draw ultimately cost the tourists the chance of taking the urn back Down Under but there is still much to play for with two Tests remaining and a chance to salvage a draw in the series.

There is a quick turnaround between Tests though this time around and although the early finish last time out gives Harris an extra day to recover, his body has had a habit of letting him down.

Only once before has Harris played in three Tests on the bounce and on that previous occasion, the paceman broke down with an ankle injury in the third of those matches – the Boxing Day Test against England in 2010-11.

Despite a history of injuries though, Clarke believes Harris will be featuring at Chester-Le-Street as the Baggy Greens look to chalk their first win on the board.

“In my mind I’m confident Ryano will be fine,” Clarke said. “Us not bowling on that last day because of the rain is definitely going to help our bowlers.

“It gives them another day to recover, and I don’t think any of the quicks who bowled in the Test have been bowling many overs in the nets over the last couple of days.

“There will be plenty of treatment, recovery, rehab. I’m confident he will be fine.”

The Australian selectors have perhaps taken the precautionary route though after including 26-year-old paceman Jackson Bird in their 12-man squad, at the expense of young spinner Ashton Agar.