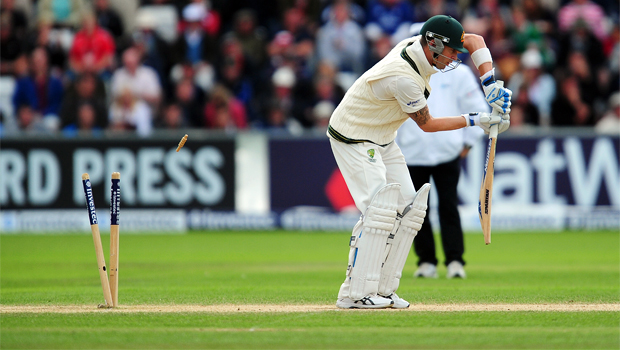 After a final day collapse which ensured England won the fourth Test, and therefore Ashes, Australia captain Michael Clarke admitted he was ‘extremely disappointed’ by his side’s batting.

Australia had looked in a commanding position at tea on the fourth day when they were 120-1 chasing 299 to win with plenty of time left in the game.

Once again though their weak batting line up came back to haunt them and they lost their last eight wickets for just 56 runs to be all out for 224, with Stuart Broad the outstanding English bowler with figures of 6-20 from a magical spell of 45 delivers.

“Chasing nearly 300 in the last innings of a Test match is always going to be difficult, there is no doubt about that,” said Clarke.

“I don’t think today was about forgetting how to win, I just think a good bowler got his back up and got some momentum and we couldn’t stop him.”

Clarke didn’t excuse himself when he criticised the teams batting performances not just at Durham but throughout the Test series which they have now lost 3-0 with one draw and just one to play.

“I want our batters to get more runs,” he said. “I’d like our batting to be stronger. Our bowlers are doing a fantastic job but I don’t think we are making enough runs – it’s as simple as that.

“I am part of the batting unit – I am no different to any other batter in that order. My job is first and foremost to score runs and I only made 25 in this Test and that’s unacceptable.”

The fifth and final Test starts at The Oval on August 21 and gives the Australians an opportunity to take something out of the series as they try and win a Test match having lost seven out of the last eight they have played.