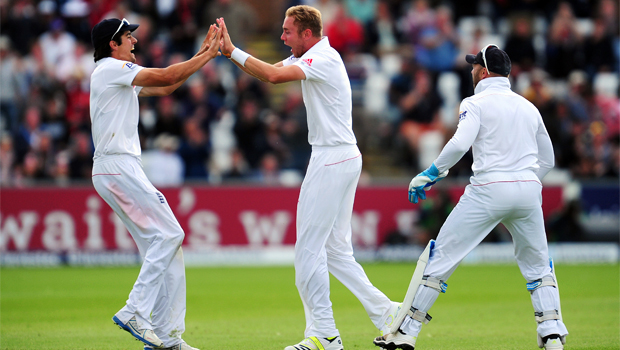 England captain Alastair Cook is looking for a record breaking fourth Test victory over Australia when the two sides meet in the final match of the series at the Oval.

England took the fourth Test at Chester-le-Street on Monday by 74 runs to win the series and it was the first time they had won three home Tests in a series against Australia since 1985.

They have never managed to achieve a 4-0 Ashes triumph but that is now firmly in England’s sights as they prepare for the final Test which starts on August 21 in south London.

“We are going to get greedy and try and repeat that at The Oval,” said Cook. “Nine wickets in a session, the crowd, excitement and nerves at the beginning – it was a special day.”

England had looked in trouble with Australia going along nicely on 168-1 but a devastating burst from Stuart Broad, who finished with figures of 6-50, saw the visitors crash to 224 all out with a day to spare.

It is not the first time the current side have turned what looked like a difficult situation into a winning one in double quick time and Cook, who came under fire for negative captaincy whilst Australia were cruising along, praised the character of the players in his side.

He added: “As a side in these last 12 months, and before that under Andrew Strauss as well, we have come through tough situations and we have learnt how not to get beaten when we are up against it.

“When we’ve got a chance, when it’s even stevens, we have the players to take the game by the scruff of the neck.”

Meanwhile Graham Onions’ hopes of playing in the last Test have taken a knock after he broke a little finger in Durham’s YB40 win against Scotland.