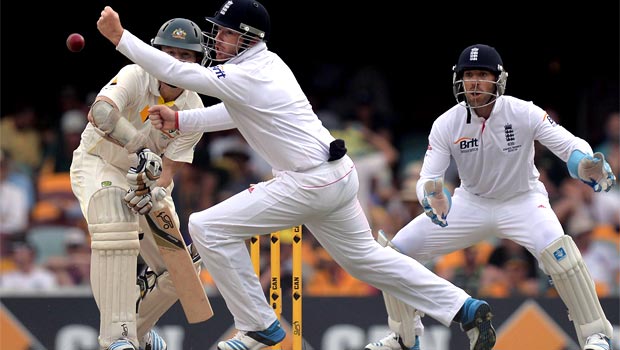 Australia’s bowlers put the hosts firmly in control after day two of the first Ashes Test as England were skittled for just 136 in their first innings.

Australia extended their lead to 224 runs by the close as England were unable to break the opening partnership, meaning Alistair Cook’s men are now fighting to save the Test with little hope of turning the match around at the Gabba.

England had earlier polished off the Australian first innings for 295 when Brad Haddin was run out for a heroic 94 after Stuart Broad claimed his sixth wicket to boast final figures of 6-81.

After a relatively serene start England lost Cook (13) and Jonathan Trott (10) to some hostile bowling from Ryan Harris and Mitchell Johnson, as the left-arm paceman claimed Trott in a leg-side strangle with the final ball before lunch.

England collapsed in the middle session as Johnson answered his critics with figures of 4-61 to send Michael Carberry (40), Joe Root (2) and Graeme Swann (0) back to the pavilion, supported by Harris (3-28) and Nathan Lyon (2-17).

Broad walked out to face a hat-trick delivery from the spinner after Lyon had removed Ian Bell (5) and Matt Prior (0) the consecutive balls as England registered a woeful nine runs for the loss of six wickets at the height of the collapse.

It was Broad (32) who was the last man out – caught in the deep after a brief counter attack – as England were eventually all out for 136 in 52.4 overs.

Australian cricket great Ian Chappell said the English currently look like ‘rabbits caught in the headlight’ and that the key to the Aussies winning will be Johnson staying in top bowling form.

“If Johnson can keep his confidence, I see a winner ahead,” he said.