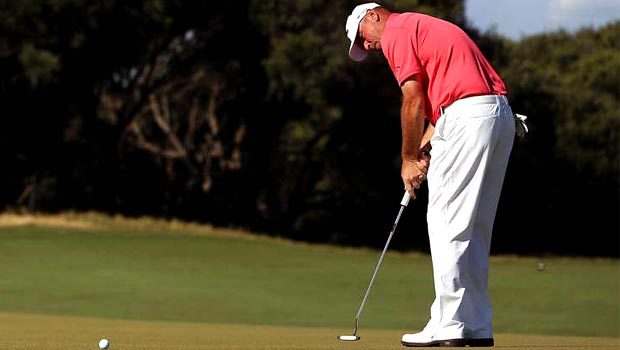 Denmark’s Thomas Bjorn holds one-stroke lead over American Kevin Streelman following a 68 in the second round at the World Cup of Golf in Melbourne.

But, despite Bjorn edging ahead of Streelman (69) to move to seven-under-par, the United States lead the overall team competition as they bid to retain the title.

Welshman Stuart Manley and England’s Danny Willett represent the best of the British with Manley at three-under-par and Willett level for the tournament, tied for 15th.

Bjorn, who shared the lead with Streelman after the first round, dropped shots at both the opening and closing holes of the tricky Royal Melbourne course.

But the 42-year-old Dane was satisfied with everything in between, particularly how he played the back nine.

“There were a couple of things that happened on the golf course that really tested me,” Bjorn said. “I three-putted the first, so got caught a bit there.

“After that I patiently worked my way into the round and played very solidly. Maybe not quite as good as the first round on the front nine, but on the back nine I played awesome.”

The tournament entry format, using world rankings and the number of players eligible from each country based on those rankings, will be used at the Rio Olympic Games in 2016.