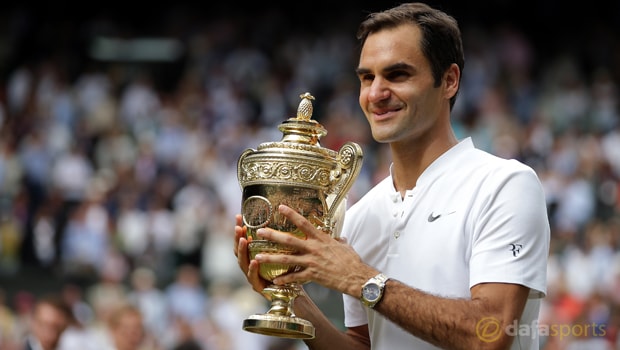 Roger Federer says there is no specific number of Grand Slam titles he wants to win before retiring and he is just enjoying the moment after being crowned Wimbledon champion again on Sunday.

Federer, who was competing in his 11th singles final at the All England Club, comfortably defeated Croatia’s Marin Cilic 6–3 6–1 6–4 to clinch a record eighth Wimbledon title.

The Swiss ace has now overtaken compatriot Stanislas Wawrinka to become his country’s number one player whilst the 35-year-old has also jumped two places up the world rankings to third.

His triumph at SW19 – Federer’s first since 2012 – means the Basel-born star currently holds two of the four Grand Slams, having beaten Spaniard Rafael Nadal in the Australian Open final back in January.

The 2008 Olympic gold medallist now has 19 Slams in the bag but when quizzed about how many more he wants to win, he revealed there is no set goal.

“The target now is to enjoy being Wimbledon champion for a year, and Australian Open champion, and you name it.

So, I haven’t sets sights on a number of Grand Slams that I have to or want to achieve,” Federer said.

“I’m playing for titles at this stage in my career; rankings not so much unless I’m as close as I am right now so I just have to check the situation – if it’s worth it to run after it or not.”

The final Grand Slam of the season takes place at Flushing Meadows, starting at the end of August, and Federer will be looking to win the US Open title for the first time since 2008.

World number one Andy Murray is a slight injury doubt at the moment after he was in clear discomfort with a hip problem in his quarter-final defeat to American Sam Querrey at Wimbledon.