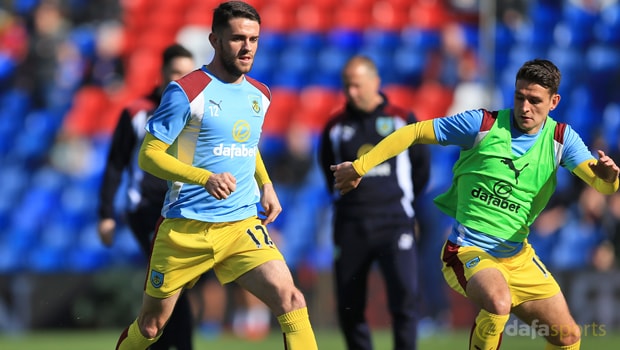 Robbie Brady says the expanding contingent of Irish players currently playing for Burnley will only help the Republic of Ireland in their quest for a spot at the 2018 World Cup.

Brady joined the Clarets at the end of the 2017 January transfer window for a club-record deal worth £13million and his addition brought the number of ROI internationals at Turf Moor to four.

Midfielder Jeff Hendrick arrived from Derby County last summer while defenders Kevin Long and Stephen Ward have been at the English club since 2010 and 2014 respectively.

Experienced forward Jonathan Walters recently increased the tally of Irish players to five after completing his £3m move from Stoke City, who are 3.10 to finish this season as the Top Midlands club.

The 33-year-old ended his seven-year stay at the Potters, having scored 43 Premier League goals, and the switch to Burnley has the potential to be his last move before hanging up his boots.

Burnley’s Irish quintet are all involved with the national team and Brady believes the more they play together on the domestic stage will transfer into international matches.

“We were all talking the other day, about how good it is for the Irish team, having us together at one club,” he said.

“The more Irish we get in, the handier it is for Ireland because we know how each other plays.”

Burnley are priced at 2.25, the same as Brighton, to be relegated from the Premier League this season, with Huddersfield Town the 1.57 favourites.

Striker Andre Gray, whose future with the Clarets is up in the air, is 81.00 to finish at the league’s top goalscorer while Tottenham’s Harry Kane is leading the market at 3.75.