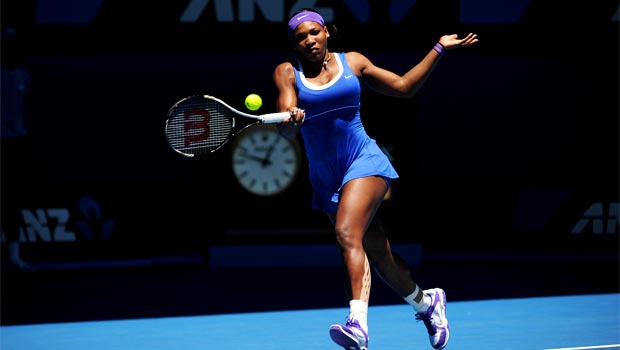 Serena Williams has been sensationally dumped out of the Australian Open by Ana Ivanovic.

Williams was the hot favourite to gain an 18th Grand Slam in Melbourne, and had looked awesome in the first three rounds, but her hopes ended on Sunday when a resurgent Ivanovic recovered from losing the first set to end the American’s 25-match winning streak.

The Serb made the most of her opportunity when Williams turned up nursing a back injury, and although the world number one won the first set 6-4, Ivanovic began to attack her opponent’s normally lethal serve, dishing out some powerful returns to stun world number one.

Ivanovic took the next two sets 6-3 6-3 to gain a first ever victory over Williams at the fifth time of asking, and now lines up in the quarter-finals for the first time since 2008.

She made the Final that year, and this win takes her a step closer to a potential meeting with Victoria Azarenka, the new favourite after the departure of Williams.

Ivanovic revealed afterwards how she managed to stay focused.

“When we were starting the match and they were talking about all her grand slam titles, it was quite impressive.

“I just stayed in the moment physically. I didn’t think much about the occasion and who I was playing, because it can get overwhelming.

“I had to remind myself all the time just to stay in the moment. Because there were moments in the match where it could have gone either way.

“I could have just made few more errors. But I really just believed in my game and stepped up when I needed to.”

Williams meanwhile revealed that she almost did not turn up.

“I almost didn’t play, but, hey, I did, and at least I feel good that I tried the best that I could on this day,” she said.

“I feel like I’ll win the title again. Maybe just obviously not this year, but maybe next year.”

Ivanovic will now play rising star Eugenie Bouchard of Canada, who saw off the local hope Casey Dellacqua 2-1 to progress.