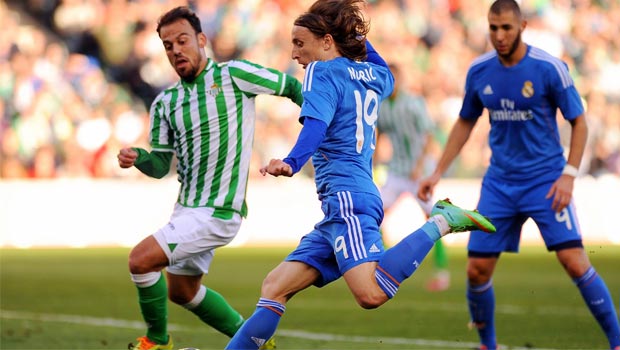 Real Madrid turned up the heat on their La Liga rivals with a 5-0 demolition of bottom club Real Betis.

Carlo Ancelotti’s had made a slow start to the season, allowing Barcelona and city rivals Atletico to steal a march, but Real are now poised to mount a serious challenge for the title after this latest win that sees them move on to 50 points for a share of the lead at the top of the table.

Goals rained down at the Benito Villamarin in Seville as Cristiano Ronaldo, Gareth Bale and Karim Benzema all found the net to leave the home side rooted deeply at the bottom of the table and in big trouble.

From the moment Ballon d’Or winner Ronaldo lashed home from long range after 10 minutes it was all over in truth as the match turned into an exhibition of the visitors’ skills, and for Benzema there was further cause for celebration, as his goal was his 100th in all competitions since moving to Madrid in 2009.

Madrid boss Ancelotti was in contented mood at the press conference afterwards.

“This was a good chance to be top for one night at least,” he said.

“The whole team played well for the whole game and there was a lot of focus.

“When we scored the first goal the match changed and we had more space to counter attack. The help the midfielders gave, especially Modric, was very important.”

It is a totally different situation that Betis find themselves in, and the home fans vented their frustration on keeper Andersen who was booed virtually every time he touched the ball during the rout.

Coach Garrido was also targeted throughout the match as former boss Pepe Mel’s name rang round the stadium, and with just 11 points earned, whoever is in charge has a job on to stop Betis from being relegated.