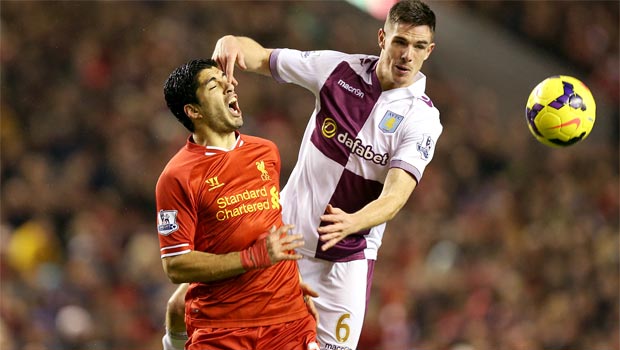 Brendan Rodgers saw his Liverpool side drop a vital two points as they were held to a 2-2 draw by Aston Villa at Anfield on Saturday.

The Reds had been scoring for fun of late, and the visit of their Midlands rivals offered the opportunity to stay in touch with the three teams above them in the Premier League.

However, right from the kick-off it was evident that this was not going to be easy, and with barely two minutes gone Gabriel Agbonlahor should have put the visitors ahead, but his close range effort with just the keeper to beat rolled agonisingly wide.

Villa also hit the post as they continued to create chances, and it was no surprise when a slick counter move after 25 minutes resulted in Weimann slotting home to make it 1-0.

Worse was to come for the home fans 11 minutes later when some awful defending allowed Christian Benteke to stretch Villa’s lead. In truth, Villa deserved to be in front, but Liverpool got more than they deserved for a below-par first half performance when Daniel Sturridge pulled one back in added time.

The second half proved a bit brighter for Liverpool as they pressed for the equaliser that when it arrived, came in controversial circumstances as Luis Suarez won a penalty after going down in the box under a challenge from keeper Brad Guzan.

Steven Gerrard stepped up and made no mistake to level the game, but subsequent chances were few and far between, and at the end, Villa can feel aggrieved that they did not leave with all three points.

Liverpool are still in fourth place for the time being, but are now eight points behind leaders Arsenal, and cannot afford any more slip ups. Even so, manager Rodgers thought it was a good effort to come back and snatch a point.

“We weren’t great, but it was going to be very important we got something from the game. We’ve shown yet again great character to come back,” he said.

“It was a good point. I don’t think we were anywhere near our level in the first half and I think you have to give credit to Aston Villa for that because they started very, very well.

“Have a look at the last week – Stoke away and Aston Villa at home. In the same games last season, we got no points from them. This time we’ve taken four out of the six.

“I go with my gut feeling. I thought it was an offensive team. I have played that before. If you want to blame me, blame me.”

Lucas picked up a knee injury during the match and has just over a week to recover before the crunch home clash with Merseyside rivals Everton on 28th January.