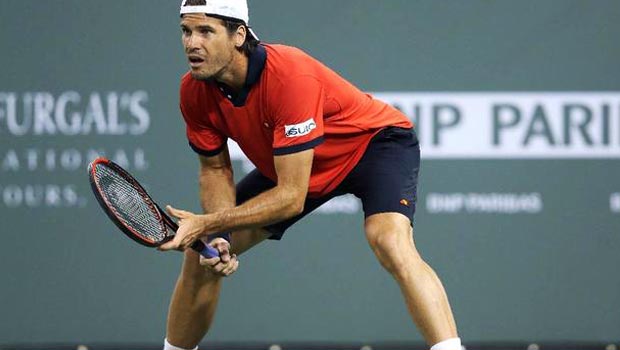 Roger Federer meets Tommy Haas for the 19th time in the last-16 at Indian Wells and may not have it all his own way if the German continues his recent form.

Federer kept his cool to hold off Dmitry Tursunov to reach the fourth round on Monday, despite being broken by the Russian when serving for the first set.

The victory extended Federer’s winning streak to eight matches following his run to the title in Dubai last week, where he beat Novak Djokovic and Tomas Berdych in the semis and final.

The 32-year-old looks rejuvenated following his struggles of last season, when he doubted whether he could win the big matches.

He said: “I could really feel at times I was actually not going to beat the best probably. I would have a chance sometimes, but more often than not I wouldn’t make it through.

“I feel different this year. I feel like if I do play my best I can come through again. That’s a major difference. That’s all the difference you really need.

“But then you need to prove it to yourself. It’s one thing feeling it, but it’s another thing really getting it done. That’s why the victories against Jo (Tsonga) and (Andy) Murray and also now Djokovic and Berdych were big wins for me to start off the year.

“Now I feel like I’m in a good place. Zen on the court. Even if I won six and six today, I just feel like I was calm.”

Federer, who is about to father his second set of twins according to reports, is operating without a coach in California after Stefan Edberg left his side to play in a veterans tournament.

It doesn’t appear to have affected him too much and he will be confident going into the Haas match, having won 14 of their 18 previous meetings – including the last on a hard court at Cincinnati last year.

Haas has, however, won the first set in their last three clashes – including the final of last year’s Halle tournament which the German won.

The 35-year-old has described his shoulder problem as “a ticking time bomb”, but showed no signs of stiffness in his straight sets win over Kei Nishikori in round three and looks capable of landing the opening set again at 3.43.