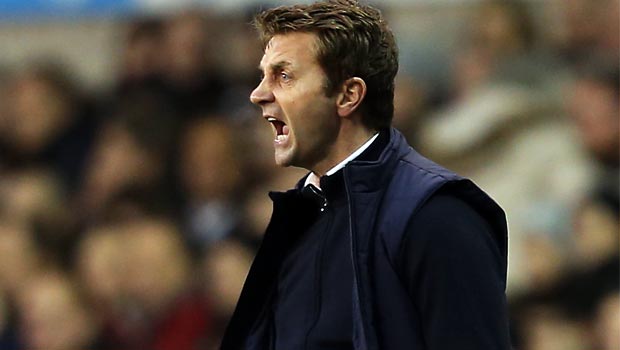 Tim Sherwood is demanding a response from his side when Tottenham, still smarting from their 4-0 drubbing at Chelsea, host Benfica in the first leg of their Europa League last-16 tie.

Sherwood accused his players of lacking “character” as costly individual errors directly contributed to all four of Chelsea’s goals at Stamford Bridge – a defeat which severely dents Spurs’ chances of qualifying for the Champions League.

“The fans were magnificent (on Saturday) and the lads owe it to them and owe it to themselves (to respond),” he told the club’s official website.

Denmark international midfielder Christian Eriksen will return to bolster Sherwood’s options on Thursday after recovering from a back injury.

Eriksen was instrumental in Tottenham’s 3-1 home victory over Dnipro Dnipropetrevsk in the previous round but missed the Premier League games against Cardiff City and Chelsea as well as Denmark’s 1-0 defeat by England at Wembley.

“Christian has contributed well in his last few matches, both goals and assists, and it’s great to have him back in contention,” added Sherwood.

Tottenham boast a strong home record in the competition – having won their last five Europa League matches at White Hart Lane, triumphing in nine and drawing two of their last 11 since a 2-1 reverse at the hands of PAOK in the group stages back in 2011.

But Benfica’s incredible form this season, where they are unbeaten since November 6 with 24 wins from their last 28 matches, suggests it will be very tough for Tottenham over the two legs.

Spurs are slight 2.38 favourites to win at White Hart Lane while Benfica are 2.74 to take a first-leg lead back to Lisbon with the draw priced 3.17.

Benfica went out of the Champions League because of an inferior head-to-head record with Olympiacos, despite beating Paris Saint Germain, and are desperate to better last season’s run to the final where they lost to Chelsea.

Jorge Jesus’ men recorded a comfortable 4-0 aggregate win over PAOK in the round of 32 with striker Lima scoring twice and his partnership with Rodrigo could be crucial again, the duo having hit 24 goals between them this term.

Oscar Cardozo, who has nine goals to his name despite missing a large chunk of the season with a back injury, is believed to be in the frame to play a part and will also pose a danger.