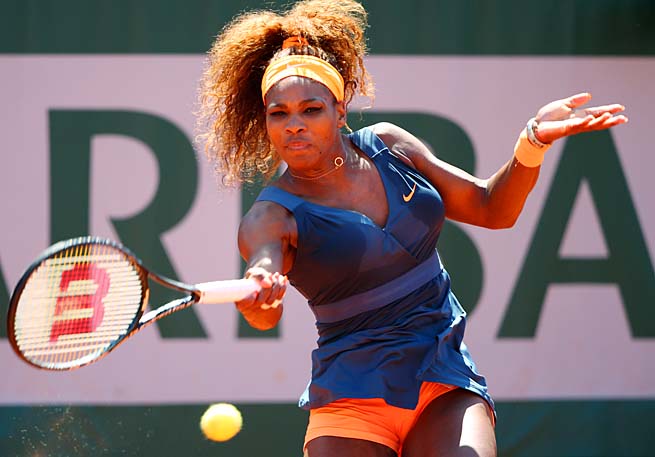 Serena Williams proved she is prepared to win ugly too when beating Svetlana Kuznetsova at 6-1 3-6 6-3 in French Open.

Serena Williams proved she is prepared to win ugly too when beating Svetlana Kuznetsova 6-1 3-6 6-3 to stay on course for only a second French Open title.
The American had barely broken sweat getting to the last eight in the French capital this time around but proved why, at odds-on with mainstream bookmakers, she is the favourite to win at Roland Garros for the first time since 2002.

The writing appeared to be on the wall for the unseeded Kuznetsova when she lost the first set before establishing any foothold in the game.

Then came the turnaround and evidence of why she had not only beaten world number ones six times before in her career, but why she had also beaten Williams twice before – including on the exact same court in this round four years ago when she went on to win the title.

With Williams rattled, Kuznetsova took the second and then went 2-0 up in the third set. However, Williams soon recovered and proved why she is not prepared to let her pursuit of glory in Paris slip away.

A stunning forehand volley winner – her 37th of the match – was followed by a huge scream of delight.

“I was so determined to get through that match, and I really, really, really wanted it more than anyone, I think,” the multiple Grand Slam winner said afterwards. “I was really just fighting, giving it everything I had out there.

“I’ve been able to come back a lot throughout my career. I don’t think anything really changed.”

Williams is now a short-price favourite to send number five seed Sara Errani free to roam Paris at her leisure. She has beaten the same opponent in all five previous meetings

“We had a pretty tough match in Madrid – I’m glad I played her in Madrid because I know she’s here to play and she’s here to compete,” Williams said ahead of the Errani clash. “She’s so serious. I can be ready for that.”