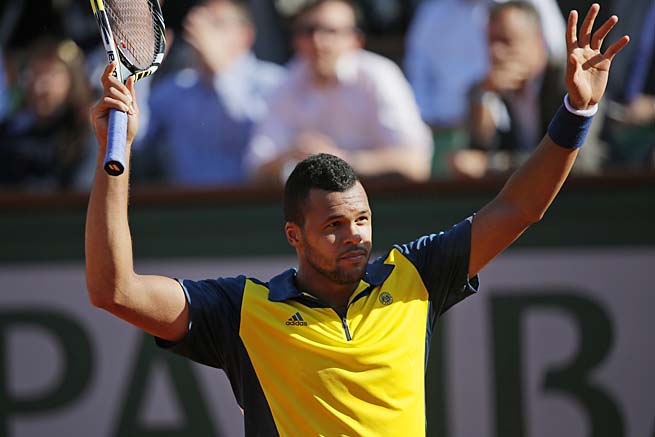 Jo-Wilfried Tsonga is now just two games away in becoming the first home winner of French Open since 1983.

French Open semi-finalist Jo-Wilfried Tsonga is now just two games away from delivering to an expectant crowd and becoming the first home winner of the tournament since Yannick Noah in 1983.

Standing in his way for an appearance in the final in the French capital is Spanish fourth seed David Ferrer, who beat countryman Tommy Robredo 6-2 6-1 6-1.

It follows a 7-5 6-3 6-3 victory against the 2009 champion and former world number one, Roger Federer, in just one hour and 51 minutes – Tsonga’s fourth win in 13 meetings with the Swiss superstar and his first since 2011. Federer, 31, was looking to reach his 34th Grand Slam semi-final.

The smile on sixth seed Tsonga’s face was as broad as his barrel chest but to prevail on home soil he must not slip into the trap of thinking the hard work is done.

This is a tournament which has left an indelible scar on the 28-year-old. Cast your minds back 12 months and he squandered four match points in a five-set quarter-final loss to Novak Djokovic.

It perhaps explains why he is second favourite in the match betting and fourth in the outright markets.

Tsonga and Ferrer have met three times, with the Spaniard leading their FedEx ATP Head2Head series 2-1 – including victory at their only clay-court contest three years ago at the Internazionali BNL d’Italia in Rome.

Tsonga added: “Now what is important is to stay focused, to think about my next match.

“Because it will be extremely tough against a player who didn’t lose a single set and won with a very striking score in the quarter-finals.”