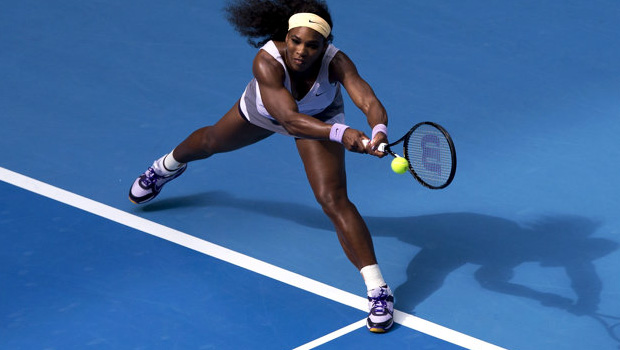 World number one Serena Williams was made to battle hard by Francesca Schiavone before moving into the third round of the China Open in Beijing.

Williams began like a woman on a mission, blasting down three aces in succession to hold serve, and it looked as though the result was a formality when she broke. However, her Italian opponent hung on before eventually going down 6-4.

However, Schiavone would not lie down, and broke Williams straight away in the second set, moving into a 5-3 lead.

She even had three set points, but the American is not seeded number one for nothing, and fought back to finally prevail 7-5.

The majority of the crowd turned up expecting to see Williams totally dominate the match, but she herself knew it would not be that easy as Schiavone raised her game.

“It didn’t surprise me,” Williams said.

“I was definitely more surprised that I played so well in the Open, but it was a different circumstance – even though the scoreline looked much easier at the Open, it wasn’t an easy match. But as for Francesca playing so well today, I wasn’t surprised about that.”

Williams even congratulated the Italian afterwards.

She added: “I said, ‘Good match.’ I told her that she was really motivating because she’s a little bit older than me, but she’s so fit and just played so well today. For me, it was inspiring – that’s what I told her.”

Williams also revealed that her participation in this tournament always brings back fond memories.

“I love the Olympics, and every time I come here, I think about them,” she said.

“Even playing doubles yesterday, we didn’t win, but walking out on that court – that’s where we won the gold medal. “I loved it here, so it’s great.”

It was not all good news for the Williams family though – sister Venus faced a barrage of 29 winners from Sabine Lisicki as the German cruised through 6-1 6-2 in a match that lasted just 53 minutes.