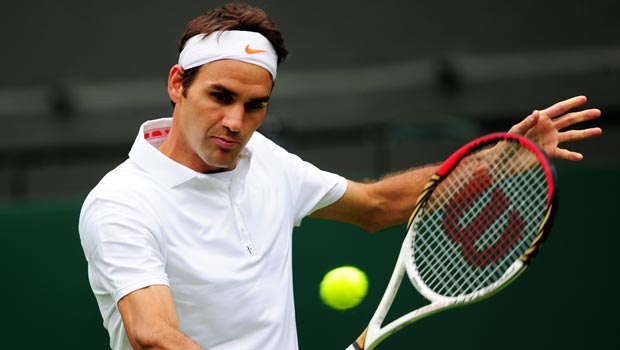 Roger Federer believes he will be relaxed at this year’s Wimbledon as he feels more pressure at the ongoing Gerry Webber Open.

Federer will begin the defence of his Gerry Webber Open title and is bidding for his seventh title in Halle after his success last year.

The 32-year-old Swiss will use the grass-court tournament in preparation for All England Club in two weeks’ time but admits he is actually more nervous about his title defence than travelling to England.

“It’s an interesting period because I have my title to defend here, and actually at Wimbledon, I don’t have anything to defend,” he said.

“But I have to prove myself somehow.”

Federer suffered his earliest exit since 2002 at Wimbledon last year when he suffered a second-round defeat to 116th-ranked Sergiy Stakhovsky.

“So, actually it’s the kind of the wrong way round for me, because usually the pressure in Wimbledon is much bigger because of the points and because you want to play well,” Federer added.

“But this year, I might go to Wimbledon a bit more relaxed. The pressure here is quite big, because I want to play well.”

World number one Rafael Nadal is also in action in Halle, as is ninth-ranked Milos Raonic.

“The draw at the Gerry Weber Open is tough,” added Federer. “Therefore it’s not easy to target the title.

“But to me it’s obvious why I’m here. I want to capture the title and play well. So, that’s absolutely my priority.”

Federer has struggled at recent tournaments, being upset by Ernests Gulbis in the French Open and Jeremy Chardy in Rome last month.

However he is among the favourites for Wimbledon where he is a seven-time champion and is priced at 6.55. Novak Djokovic is the favourite at 2.72 while Nadal, on the back of his ninth Roland Garros title, is valued at 5.34.

Defending champion Andy Murray can be found at 4.57.