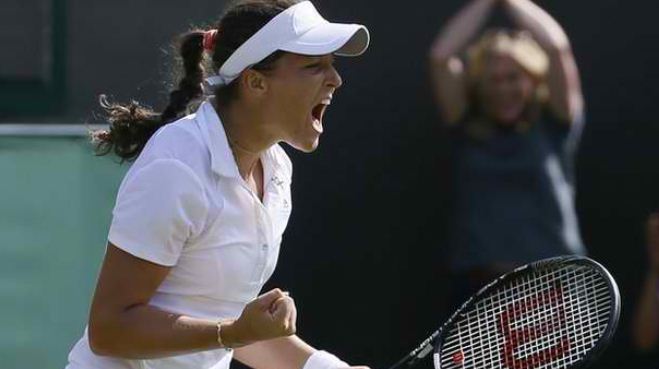 Laura Robson admitted that the support of the Wimbledon crowd helped her to fight back from brink of defeat to book her place in the fourth round.

The British number one had been in impressive form on her run to the third round for the first time but looked anything but against Marina Erakovic, who took early control of proceedings with a dominant first set.

The New Zealander looked set to break home fans’ hearts when she secured an early break in the second only for Robson to finally overcome her nerves and turn the game around.

The 19-year-old reeled off eight games on the bounce to draw back level and then open up a break in the decider, before keeping her composure to serve out for the win.

“I was getting my butt kicked basically,” Robson told the BBC.

“I was really struggling to return her serve. She is playing really well and I just thought I would try as best as I can, work as hard as possible, and just stick with it until she started to get nervous, which is what happened.”

Speaking about the support she received from the crowd, Robson added: “I don?t think they had much to support in the first set, but they were amazing. I thought they helped a lot.”

Robson has certainly got the home expectations up after becoming the first British woman since Sam Smith in 1998 to book her place in the fourth round, where she will meet Kaia Kanepi after the Estonian eased past American Alison Riske 6-2 6-3.

The British hope is also set to become the first British woman since Jo Durie in 1987 to feature in the world’s top 30 players when the rankings are updated following the tournament.