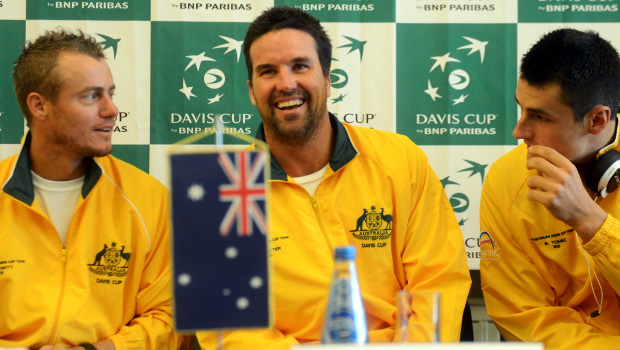 Australia’s Davis Cup captain Pat Rafter believes his team can make their mark in the World Group after seeing them qualify on Sunday.

Australia reached the World Group for the first time since 2007 by beating Poland 4-1, and former US Open winner Rafter now wants to see them push on and be regulars at the highest level.

The draw is made in London on Wednesday when the 16 teams, Australia included, will learn who they play in the first round.

Rafter is confident in his team’s ability, with Bernard Tomic and a revitalised Lleyton Hewitt heading the charge, but knows that success depends to some extent on the luck of the draw.

“We have a very good team but you do not want to play Spain in Spain on clay,” he said.

“There are a few matches we don’t want, that no-one wants. But outside the top couple of teams, we have a realistic chance of winning.

“Right now we’re just happy to be in the World Group. When we get ready for next year we’ll get psyched up and motivated for that.

“I think in three of four years we’re going to have a really great team.

“Bernard has been our best singles player for the last few ties and his singles record is pretty impressive.

“He always gets the job done. He came here with low confidence and he found a way to win these two matches.”

The draw takes place at 11am on Wednesday, with the following teams seeded: Czech Republic, Serbia, Spain, Argentina, France, USA, Canada and Kazakhstan.