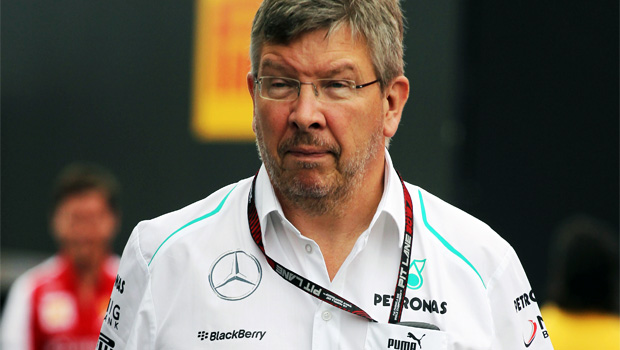 Mercedes team boss Ross Brawn would like to see his squad overtake Ferrari to go second in the battle for the F1 Constructors’ title.

Ahead of this weekend’s Singapore Grand Prix, Mercedes trail Ferrari by three points, but Brawn is optimistic that Lewis Hamilton and Nico Rosberg can muster enough points to help turn the tables on their Italian rivals.

Brawn said: “Whilst our design and development priorities are naturally increasing towards our 2014 efforts, our aim is to extract the maximum from the car we are racing and regain our second position in the constructors’ championship.

“This will require a big effort from the team, combined with consistent points finishes from Nico and Lewis.

“There has been a lot of hard work at our factories in Brackley and Brixworth since the summer shutdown, and the developments that we have found will be introduced during the upcoming ‘flyaway’ races.”

“This weekend’s race in Singapore begins a gruelling series of seven races in ten weekends for the team and we are all focused on regaining some of the momentum we lost at the past two races,” he said.

“We expect the return to maximum downforce configuration to suit our car and we may see another shift in the competitive order between the teams.

“Singapore is a highlight of the Formula One calendar, with its unique setting and night race format, and provides the cars and drivers with tough tests of reliability and concentration during a race which usually lasts the full two-hour time limit.

“We will bring new developments to the car once again for this race and we are all focused on maximising the opportunities for both Lewis and Nico, in order to re-establish ourselves in second position in the constructors’ standings.”

Red Bull though are obviously the team to beat with Sebastian Vettel ending Mercedes’ recent qualifying domination, turning successive poles into race wins and the German has a good record at the Chinese Grand Prix as he looks to make it a hat-trick of victories to tighten his grip on the Drivers’ Championship.