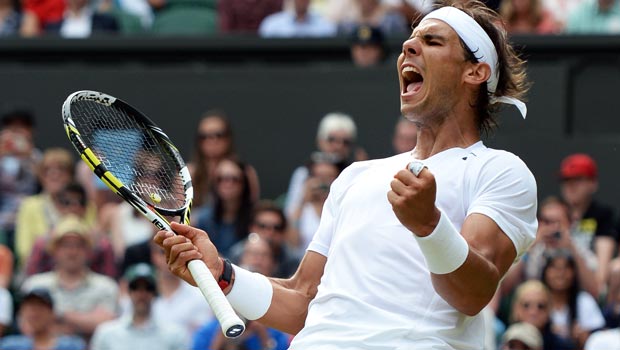 Rafael Nadal felt his performance against Lukas Rosol in the second round of Wimbledon was his best on grass for some time and he is happy with the way he is adapting to the surface.

The Spaniard looked in danger of going out early again at the hands of Rosol on Thursday, the Czech taking the opening set as he looked to repeat his triumph over Nadal from two years ago.

The world number 52 went close to taking a 2-0 when he had set point in the second but two-time champion Nadal fought back to take it on a tie-break.

The world number one then moved through the gears in the third and fourth sets as he booked his place in the last 32 at SW19 for the first time since 2011.

Nadal has dropped the first set in the first two rounds of this year’s Wimbledon before responding to win in four, but claims he is happy with how his game is coming together on grass.

“It’s a great win for me. It’s the best level I played on grass since a long time ago, the last three sets. That’s very important news for me,” said the 14-time Grand Slam champion.

Nadal went on to say that revenge hadn’t been on his mind for the match with Rosol, claiming his only motivation is to play well and keep advancing at the event.

“I never play for revenge, every match is a different match,” added Nadal. “Today was another match I tried to win.”

Next up for Nadal is a clash with Mikhail Kukushkin of Kazakhstan on Saturday. Nadal is 1.14 to win the encounter with his opponent 5.76.

The 28-year-old is still on course to face Roger Federer in the semi-finals, the seven-time Wimbledon champion seeing off Gilles Muller in straight sets to set up a meeting with either Marcel Granollers or Santiago Giraldo.