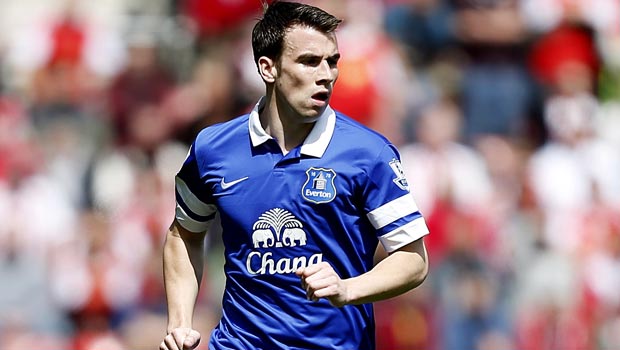 Seamus Coleman believes Everton are heading in the right direction under manager Roberto Martinez and was happy to sign a new five-year deal with the club as a result.

The Republic of Ireland international has become a key player for the Toffees since being introduced to the first-team set-up in 2010 and last year was selected in the PFA Team of the Year.

The 25-year-old was also handed the captain’s armband for Ireland’s clash with Germany as he continues to establish himself on the international stage.

Everton are keen to make sure the attacking right-back is not tempted to move elsewhere and have now agreed terms on a new contract that will keep him at Goodison Park until the summer of 2019.

Coleman says he is happy to follow in the footsteps of his manager Martinez by signing a new five-year deal and claims the club are making strides towards challenge the Premier League’s big guns under the Spaniard.

“With how much I love playing at Everton, I was delighted to get the chance to sign another contract,” Coleman told Everton’s official website.

“I’ve been at Everton five years now and I love everything around the place. I love working with all the players, the staff, the coaching staff – everything. It was a very happy decision to make.

“With the manager and some of the players we have, we’re going to the right places.”

Coleman is the latest player to commit his future to Everton, as Tim Howard, Sylvain Distin and Leighton Baines having all been handed new deals since the start of the year.