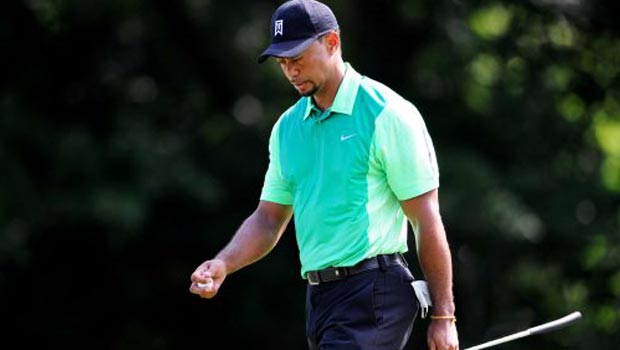 Tiger Woods felt his performance was not fairly reflected in his first-round score of 74 after the 14-time major winner made his long-awaited return at Congressional.

The former world number one was back playing a PGA Tour event for the first time in three months on Thursday after undergoing back surgery to correct a long-standing problem.

Woods has missed two majors and lost top spot in the rankings to Adam Scott in the time he has been away but is looking to get back up to speed quickly.

The American initial struggled out of the blocks at the Quicken Loans National as he carded five bogeys in the first nine holes.

Woods dropped two more shots after the turn but finished strongly with three birdies in the last six holes as he signed for a three-over-par round which leaves him eight shots off first-round leader Greg Chalmers.

Woods, who is hoping to get himself in shape in time for the Open Championship next month, said he was happy overall with his return to competitive action but admits he has some mistakes to iron out.

“The hard part was just getting into the rhythm of playing competitively,” said Woods.

“You play with your buddies all day for cash and stuff but it’s just not the same. It’s not the same as tournament golf, different level.

“(Here) adrenaline is rushing and I hit the ball further out here than I do at home. It unfortunately took a while to get the feel for it. That didn’t start happening until midway through my front nine.

“I made so many little mistakes. But I played a lot better than the score indicated, which is good.”

Woods, who won this tournament in 2009 and 2012, went on to say that his back felt “fantastic” after the first round and he is confident he has fully recovered from his operation.