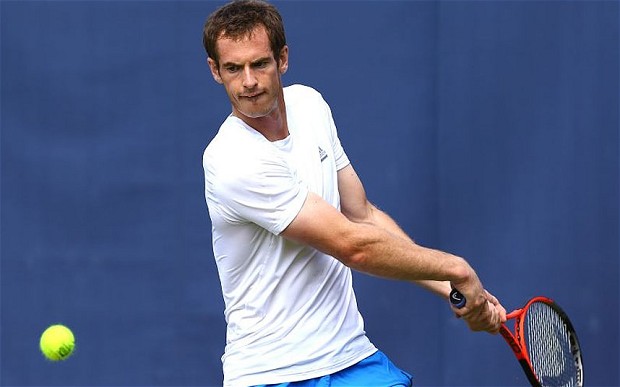 Andy Murray has downplayed his recent stint on the sidelines and believes missing the French Open could in fact enhance his chances of winning at Wimbledon this year.

The world number two suffered a back injury in his first match at the Rome Masters in May and subsequently decided not to risk aggravating the problem further in the year’s second Grand Slam event in France.

There had been suggestions that he would not have fully recovered in time for Wimbledon but Murray insists that he is raring to go and the extra time he has been given to adapt to grass could help him end Britain’s 77-year wait for a Wimbledon men’s singles title.

“Grass takes time to get used to. I’ve been on the grass for 10 days or so and that’s a week longer than if I’d been at the French Open,” Murray said.
“Hopefully [missing the French Open] will turn out to be a blessing.

“I’ve done enough training over the last 10 days or so. I actually did a big training block after Monte Carlo so some of that should still be in there too so it’s just matches that I’ll need.

“Normally, coming from the clay court I’d be match tough, just not used to the surface, whereas this year I won’t be match tight but at least I’ll have had 10 days on the grass.”

Murray will be looking to go one better than last year at SW19 when he lost in the final to Roger Federer, although he did bounce back well from the defeat with victory at the Olympics – beating Novak Djokovic and Federer at Wimbledon to take gold – before landing his first Grand Slam title at the US Open.

The British number one will warm up for Wimbledon at Queen’s Club, which gets underway on June 10, and leads a field that includes the likes of Tomas Berdych, Juan Martin del Potro, Jo-Wilfried Tsonga and defending champion Marin Cilic.