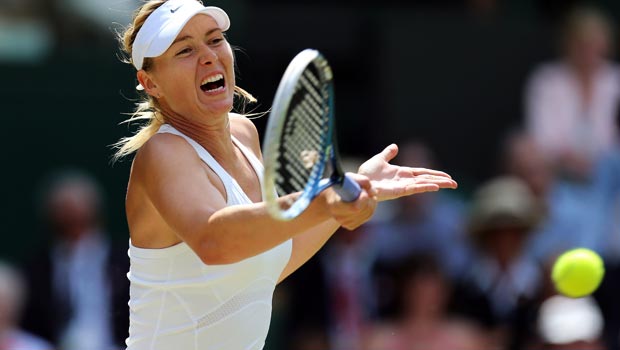 Maria Sharapova insists she is feeling relaxed despite her Wimbledon schedule being altered because of Monday’s rain delays.

The Russian has a great chance of winning the event for the second time with the likes of Serena Williams, Li Na and Caroline Wozniacki all out.

Sharapova, who won the event in 2004, was unable to play Angelique Kerber on Monday evening due to the rain. The pair will now clash on Tuesday on Centre Court with the winner set for a tough match against Eugenie Bouchard in the quarter-finals on Wednesday.

Bouchard managed to beat the in-form Alize Cornet on Centre Court while a number of matches were stopped due to the rain.

The French Open champion, 1.30 to win the first set against Kerber, would then need to play on Thursday in the semi-finals before one rest day ahead of Saturday’s final.

Despite the gruelling schedule, Sharapova insists she is feeling relaxed with life at SW19.

She said: “I don’t like to categorise each tournament. I like to go about my business as it’s any other day.

“Just because I’m in London or Paris, playing the French or Wimbledon, I like to keep those routines the same. I think that helps you mentally because it doesn’t matter if you’re playing a smaller tournament or a grand slam, you know what works for you and you try to carry that through.”

Sharapova is currently the 3.10 favourite to win Wimbledon, with Bouchard priced at 8.00 with Dafabet.