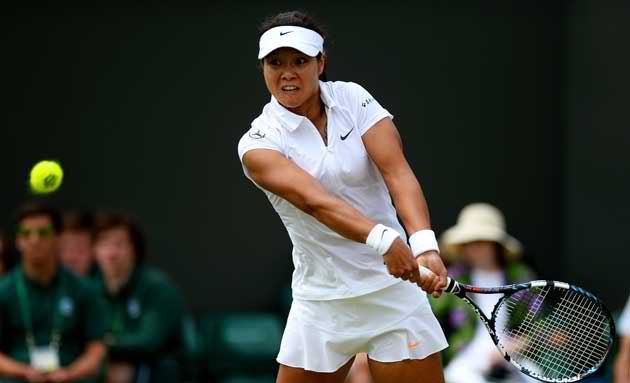 China’s Li Na finds herself as the third highest seed left standing at Wimbledon after a host of shocks in week one.

The 31-year-old has managed to come through unscathed in her half of the draw after witnessing the likes of Victoria Azarenka, Maria Sharapova and Sara Errani all exiting early.

Li revealed that the hopes of the Chinese nation has made her even more determined and focused on reaching the final a week on Saturday.

“I like the pressure,” the 2011 French Open champion said.

“The people without pressure, how they can live? I mean, the pressure makes me stronger. I can prove myself, as well.

“Why I should carry for the whole country? I’m only a tennis athlete. Only a tennis player. I try as best as I can on the court. This is my job.”

The sixth seed said she was not at all surprised at the departure of some big names already.

“Welcome to the crazy women’s tennis tour!”, she added.

“I know this is bad, but I have to say it’s worse for Wimbledon, for history, because many big stars are out of the tournament, and also so many pulled out due to injury.

“So of course I was sad, but the same time I got some information because I really do not want to be the next one out.

“The Grand Slams are very tough tournaments. It is the same for everyone. Everyone has the chance to be the champion.”

Li now faces Czech 32nd seed Klara Zakopalova in the third round. The Chinese has come out on top on the last two of their four meetings, including in the Shenzhen final earlier this year.

“I played her beginning of the year, first tournament in China, in the final. She plays more flat on the grass court. So I think it’s a pretty good surface for her,” Li said.

At the age of 31, Li is not even the oldest player left standing – that distinction goes to Kimiko Date-Krumm, who at 42 has the unenviable task of facing defending champion Serena Williams in the third round.

Li does not mind answering any questions, but the age one is her least favourite.

“So many people start to ask about age, so I really hate this one, because right now I’m feeling I can play well on the court, and also I am feeling healthy. So I really love the tennis life,” she added.