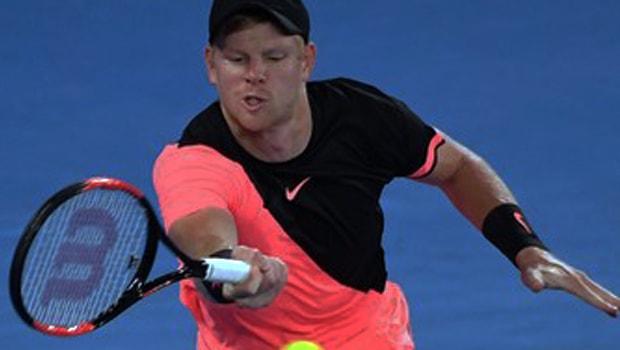 Kyle Edmund says he’ll take enormous positives from his first Grand Slam semi-final appearance at the Australian Open, despite the disappointment of losing in straight sets to Marin Cilic.

The 23-year-old Englishman enjoyed a remarkable run to the last-four before bowing out 6-2 7-6 (7-4) 6-2 against former US Open champion Cilic at Melbourne Park on Thursday.

Edmund took the tournament by storm, knocking out 11th seed Kevin Anderson in the first round and world number three Grigor Dimitrov in the quarter-finals.

Having gone into the first Grand Slam of the season ranked 49th in the world, Edmund emerges knowing he’s about to move into the top-30 in the rankings for the first time.

After the disappointment of defeat will come a sense of what he achieved in Melbourne in terms of career progress, he says.

“Obviously disappointed right now, but [I] can be very happy with the way I’ve gone about things. Played a lot of tough matches. Won some tough matches and beat good players,” said Edmund.

“This type of tournament just gives you the bug to want more. Once you get a taste, it’s like, yeah, I want more of this. I’ll definitely go away from the whole week feeling positive.”

Edmund came up short in his bid to become just the third British male to contest an Australian Open final in the open era, after Andy Murray and John Lloyd.

Now a television pundit, Lloyd expressed the opinion that he’d seen a side to Edmund’s game he didn’t know existed, and that it bodes well for his future plans in the game.

“Before the Australian [Open], I would have said Kyle was top-30. I didn’t think he had enough flexibility in his game – he didn’t have a plan B or C,” admitted Lloyd.

“But after watching the Australian I’ve changed completely now. I think he’s got a very good shot at being top 10.”