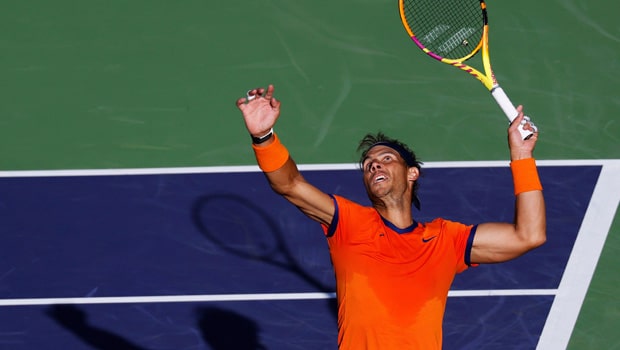 Seven-time slam champion Mats Wilander reckons Rafael Nadal pushed his body a little too much. Nadal has been ruled out for four to six weeks after suffering a stress fracture in his rib. The Spaniard suffered the injury during his Indian Wells semifinal match against compatriot Carlos Alcaraz, which lasted for three hours and 12 minutes.

Nadal admitted that he had breathing issues against Taylor Fritz in the final and thus he wasn’t at his best. Fritz was able to end Nadal’s unbeaten streak of 20 matches in the season.

Meanwhile, Nadal had an outstanding start to 2022 as he won Melbourne Summer Set 1, Australian Open (which was his 21st Grand slam title), and then the Mexican Open. After such an impressive start, Wilander thought Nadal will opt out of Indian Wells and Miami Open to begin his preparation for the clay-court season, which always has been his strength.

However, as Nadal has always been a competitor, he decided to take part in the Indian Wells and push the envelope.

Mats Wilander said on Eurosport, “In a perfect world, I would’ve thought that once he won the tournament in Acapulco, Mexico, playing as well as he did, beating [Daniil] Medvedev again in two sets, beating Cameron Norrie in the finals in two sets, I was 100% sure he wasn’t going to play in Indian Wells or Miami.

“That he would take a month off from tournaments and then go to his normal schedule which is play the clay court. “So I think maybe he pushed his body a little bit too much. But with Rafa Nadal, he loves tennis and competing so much that when he’s feeling good he’s going to go out there and run as hard as he can,” the Swedish great claimed.

“This is his career and it’s not easy, he keeps saying that himself, but he’s had a pretty decent career. “I mean he’s the best player of all time on paper for the men, so I think that maybe what he’s done is actually better than if you play for 18 years in a row and never take a break.”

Nadal will now recover just before the French Open and he will not have much time to prepare for the competition. The Roland Garros will begin on May 22 in Paris.