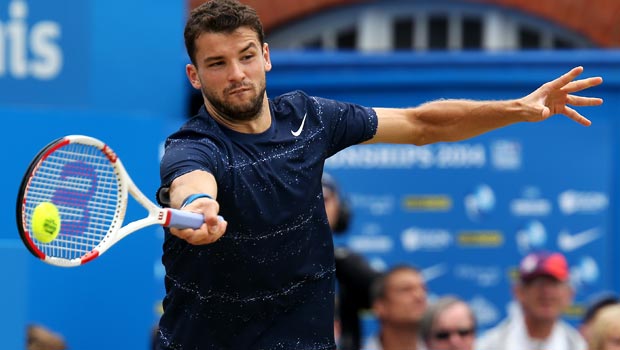 Grigor Dimitrov has already targeted a good run at Wimbledon this month after the Bulgarian clinched the Aegon Championships at Queen’s Club on Sunday.

The Bulgarian, who was seeded fourth for the tournament, had to show all his fighting qualities to defeat Spaniard Feliciano Lopez in what was a hard-fought encounter.

The win also puts the Bulgarian into the record books as the 23-year-old became the first player this year to win on three different surfaces having already enjoyed success at Acapulco and Bucharest.

Dimitrov certainly looks to be living up to the potential witnessed in his junior career having claimed the title at Wimbledon and the US Open in 2008, whilst also holding the world number one spot at that time.

The current Queen’s champion has now set his sights on enjoying a successful tournament at the All England Club and is looking to carry his momentum on.

“The only thing I can say is I’m going to be with a lot of positive vibes coming out to Wimbledon,” he said.

“Of course, Wimbledon has been close to me and what I have always wanted to achieve, and it’s definitely on my list to do or to win, and I’m going to have the chance in a week to go out there and perform the best way I can.”

Dimitrov has quickly become one of the dark horses for Wimbledon and the Bulgarian is an outside shot at 21.00 to take the title, with Novak Djokovic the pre-tournament favourite at 2.60.