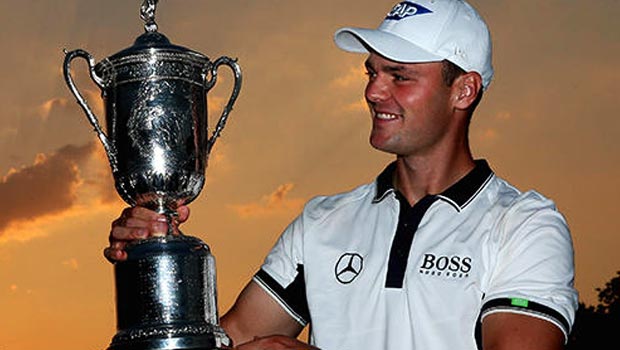 Martin Kaymer is aiming for more success on the major front after claiming the US Open on Sunday and has already targeted the Open Championship next month.

The German cruised to an eight-shot victory at the challenging Pinehurst course to end up on nine-under, finishing comfortably ahead of his nearest rivals Rickie Fowler and Erik Compton.

The dominance of Kaymer was on show from an early stage of the tournament with the former world number one shooting consecutive scores of 65 in the first two rounds to equal the lowest ever total in a major championship after two days’ play.

A round of 72 on Saturday, in what is commonly known as ‘moving day’, only reduced the Germans lead by a single shot heading into Sunday and the two-time major winner produced a classy round of 69 to end on 271 overall, taking the title comfortably.

Kaymer, who is now 11th in the world after lying outside the top 60 last month, has already said he is targeting the Open Championship at Hoylake next month as he aims to become the first ever German to win the tournament.

“We almost have the German Grand Slam, it’s only the Open missing,” he said. “Winning the PGA, winning this one now, I hope it will make Bernhard (Langer) proud. I’m sure it will make all Germany proud.”

Kaymer already looks a decent bet heading into the major at Royal Liverpool Golf Course having enjoyed success at the US Open and also in what is regarded as the unofficial fifth major of the season, the Players Championship.

The German has also put himself firmly in the frame for a spot in the European Ryder Cup squad when the competition heads to Gleneagles in September, as if he can keep his form going then captain Paul McGinley will find it hard to ignore the 29-year-old for inclusion.